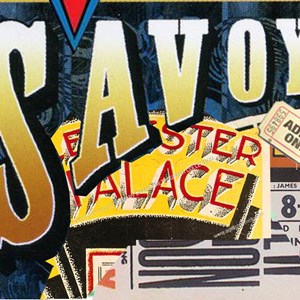 AN ART deco cinema that once stood on the site of a new road in Leicester city centre is providing the inspiration for a spectacular new mural.

The Savoy Theatre – later known as the ABC – stood on Belgrave Gate for around 70 years but, after lying empty for years, the building was demolished by its owners in 2007.

Now, artists from Leicester-based Graffwerk have started work on a large-scale mural that’s been inspired by the Savoy and two other long-gone venues on Belgrave Gate: the Floral Hall and the Palace Theatre.

Covering three buildings, the giant mural will provide a fitting backdrop to Savoy Street – the new road for buses, taxis, pedestrians and cyclists that will link Belgrave Gate with Mansfield Street from Sunday 11 October.

Deputy city mayor Cllr Adam Clarke said: “Many local people will remember visiting the Savoy cinema in the 1940s and 50s, so I’m sure this mural will bring back fond memories of nights out in Leicester and firmly connect the new road with the city’s past.

“Graffwerk have got a great track record in working with us to produce stunning artworks – and this latest project is set to transform what could have been a rather featureless new road into an attractive route that celebrates the area’s history and heritage.”

Izzy Hoskins from Graffwerk said: “We’re very excited to deliver this mural, which will celebrate the cinematic heritage of the site.

“With a project of this scale, there’s a lot of preparation work to do before you can start painting – but the mural will rapidly take shape, once paint starts to go on the walls next week.”

Local artists MONO and Richard Peacock have been commissioned to create the artwork.

Work on the giant mural started yesterday (Monday 21 September) and is expected to take around 20 days to complete.

Savoy Street will open to buses for the first time on Sunday 11 October, providing passengers with a quicker, and more direct, route out of the city centre. The former bus route will be closed to traffic from that date, with Haymarket and parts of Belgrave Gate and Church Gate being incorporated into the city’s pedestrian zone from then on.

The £50,000 budget for the mural and associated costs will be funded as part of the £4million scheme to construct Savoy Street and upgrade both Mansfield Street and Sandacre Street.

The construction of Savoy Street and the related improvements to Mansfield Street and Sandacre Street are supported by the Government’s Local Growth Fund through the Leicester and Leicestershire Enterprise Partnership Limited (LLEP).