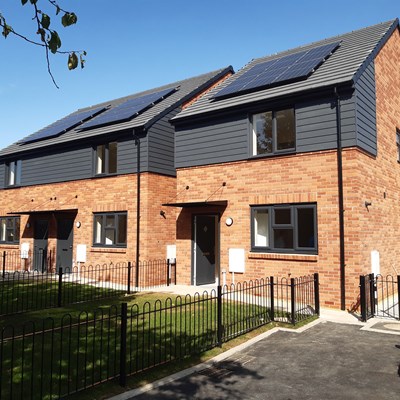 The first new houses have been completed in ground-breaking project by Leicester City Council to build hundreds of affordable rental homes for families across the city.

Three new homes at Ambassador Road, in Crown Hills – two semi-detached homes and one detached house – have been completed and handed over to the city council by contractors the Woodhead Group.

They are the very first of 29 new homes being built at six sites in the city, in the first phase of a project which will see more than 300 new council houses built over the next few years.

Work is also progressing on council house building at five sites in Netherhall, Thurnby Lodge, Beaumont Leys and Humberstone, which between them will create a range of semi-detached and detached homes, bungalows and wheelchair-accessible properties.

Further work has also taken place to identify sites for planned future phases of building, which will bring the total investment to about £48million and create 320 new homes.

Those next phases will see more new affordable rental homes being built at the former Saffron Velodrome site and on land off Lanesborough Road, in Rushey Mead. Two new Extra Care Schemes, providing assisted living homes, will also be built, at a site in Braunstone and another in Beaumont Leys.

“This project gives us the chance, as the city council, to take a lead role in the creation of much-needed new affordable council housing, as well as investing in areas of the city and regenerating disused areas of land to give them a new lease of life.

“As this programme of building work continues it will help increase our council-owned housing stock, and help take a step closer to meeting the city’s extensive housing needs.”

Work at the five remaining phase one sites is due to be completed by early 2021.

At Brocklesby Way, in Netherhall, one detached house is planned, along with one wheelchair-accessible bungalow, while two new bungalows are planned for a site at nearby Maplin Road.

Five detached bungalows are underway at Rosshill Crescent, Thurnby Lodge, one of which will be designed to be accessible by people with disabilities.

Work on the phase two sites could be underway by spring 2022.