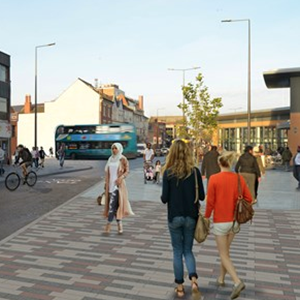 A NEW road that will provide a quick route out of the city centre for buses leaving the Haymarket bus station will open next month – paving the way for the extension of Leicester’s pedestrian zone.

With buses using the new Belgrave Gate-Mansfield Street link road from Sunday 11 October, and the current route along Belgrave Gate, Haymarket and Church Gate closing to all vehicles, the city council will be able to create an attractive, and safe, traffic-free space around Leicester’s historic Clock Tower.

Businesses in the area are being contacted this week to remind them that the roads along the current bus route will be incorporated into the city centre pedestrian zone in three weeks’ time.

From Monday 12 October, deliveries to businesses in the area, as well as services such as waste collections, will need to take place between 5am and 11am from Sunday to Friday, and from 5am to 9am on Saturdays – in line with the rest of the city centre pedestrian zone.

City Mayor Peter Soulsby said: “The new link road – Savoy Street – will improve bus journey times for passengers, while paving the way for the regeneration of the very heart of the city centre.

“This investment around the Clock Tower will be a boost for local businesses, and work to transform this popular meeting spot with high quality porphyry paving is already well under way, with work on the other streets in the area due to start in the new year.

“Once they’re part of the city centre’s pedestrian zone, businesses in the area will benefit from greater footfall and a much improved street environment.

“The pedestrianisation of the area also means there are opportunities for food outlets on Belgrave Gate and Church Gate to apply for a street café licence – which could be a real boost for their business.”

Letters to businesses on Church Gate (between Haymarket and Mansfield Street), Belgrave Gate (between Abbey Street and Haymarket) and on Haymarket are being delivered this week. Any businesses with private off-street parking within the extended pedestrian zone will be able to apply for a permit, giving them 24-hour access to the zone.

Leicester’s pedestrian zone was established in 2007 and has been progressively extended over the years. From 11 October, it will include nearly 2.5km of streets. It also includes arcades and pedestrian walkways, open spaces such as Jubilee Square, Green Dragon Square and the Clock Tower area, as well as the Highcross and Haymarket shopping centres.

The construction of Savoy Street and the related improvements to Mansfield Street and Sandacre Street are supported by the Government’s Local Growth Fund through the Leicester and Leicestershire Enterprise Partnership Limited (LLEP).