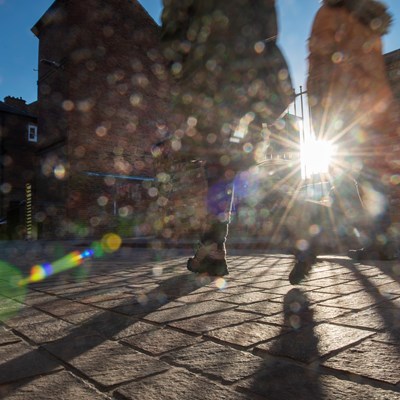 THE successful completion of a five-year project to restore and regenerate the architectural heritage of Leicester’s Old Town could offer a blueprint for future investment in the city centre.

The five-year programme focussed on buildings in the Greyfriars area offering property owners and businesses grants to help cover the costs of restoring building facades, reinstating original architectural features, and bringing vacant properties back into use.

It is the programme has helped attract over £10million of private investment into the area.

Grant funding was awarded for restoration work on 30 historic buildings in the area.

A further 20 buildings have also been renovated thanks to private investment and businesses continue to be attracted to the area. Along with new bars, restaurants and office space, the area now boasts a boutique hotel and monastic community for young adults.

The Grade II-listed former Leicester Saving Bank at 4 St Martins was one of the first properties to benefit from the Greyfriars THI scheme. A substantial grant was awarded to the new owners to support efforts to completely restore the building which had stood empty for around a decade. Work carried out included re-glazing and restoring the building’s striking lantern-style roof light, and the installation of a new mezzanine floor to provide seating directly beneath it. The grant also supported the restoration of key architectural features, including repairs to the windows and decorative stonework and treatment of dry rot and water damage, which was placing the building at risk of serious, irreversible damage.

The building is now due to reopen this month as a new restaurant and cocktail bar called Sonrisa. Work on new flats to the rear of the property has also been completed.

The Two Tailed Lion was one of the later properties to benefit from the scheme. The former late 19th century, Grade-II listed town house which has since been converted into a pub, has seen traditional features reinstated including stained-glass windows, an intricately detailed cast metal downpipe and a solid timber front door.

Alongside the ambitious building restoration programme, the city council carried out a £3.7million programme to revamp five key streets in the Greyfriars conservation area, reconstructing footpaths in high quality block paving and resurfacing roads in coloured asphalt. Footpaths in the area were widened where possible, new signage and cycle parking was added, more trees were planted and even the drain covers were replaced with specially commissioned pieces with a style that recalls the history of the area.

The revamp of this part of the Old Town has attracted wider interest, such as providing an attractive backdrop for leading Leicester-based hosiery manufacturer Pantherella to launch its new collection of luxury socks and scarves.

“We are so grateful to the National Lottery Heritage Fund. The award of £1.1million – made possible by National Lottery players – acted as a catalyst for five years of truly transformative change and regeneration in this area. It has helped turn what was formerly a fairy uninspiring area into a vibrant and really attractive location for business, pubs and restaurants. It’s a real jewel in the city’s crown.”

He said: “When we set the ball rolling five years ago, I don’t think anyone expected to see the fantastic level of support from property owners and businesses in the area. This has been a true collaboration between so many partners and it is a credit to the project team who helped bring everything together.

“With new businesses continuing to be attracted to the Greyfriars area, I think we’ve demonstrated that investment in conserving and celebrating our architectural heritage can offer a blueprint for the future of city centres.

“I am really excited that we are able to follow up on this fantastic project with new High Street Heritage Action Zone funding that will allow us to bring similar heritage-led improvements to two more historic city centre streets.”

The wider Greyfriars Townscape Heritage Initiative project also included a range of events, including talks and walking tours, that attracted over 3,000 people.

A programme of heritage skills workshops was also developed to help ensure that expertise was in place to support the continued maintenance and sensitive of the historic buildings in the area.

The area’s historical importance as Leicester’s legal quarter was a key element of the project and a range of new resources can be found of the legacy website at www.greyfriarsheritage.org.uk

And thanks to funding secured by Leicester City Council last year, heritage-led regeneration will continue to help revamp key shopping streets in the city centre as part of the national High Streets Heritage Action Zone scheme. Full details of the scheme will be publicised in the summer.