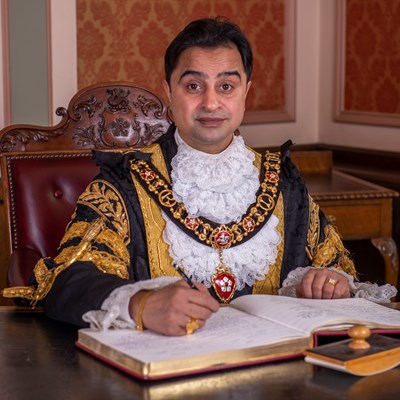 THE new Lord Mayor of Leicester has been officially inaugurated in a ceremony at the Town Hall.

With just a handful of guests present at the Town Hall, the majority of councillors joined via Zoom while other guests watching a live stream of events.

Councillor Bajaj, who was born in Delhi, moved to the UK as a child and grew up in Belgrave, has been a councillor since 2007, representing the Evington ward.

His election had been deferred for 12 months due to the lockdown restrictions which meant the mayor-making ceremony in 2020 couldn’t go ahead.

Cllr Byrne’s term of office as Lord Mayor lasted two years as a result, during which Cllr Bajaj served as Deputy Lord Mayor.

During his term of office, he has chosen to support two charities. Silver Star Diabetes, which will be focusing its work on Leicester’s first diabetes village to provide a one-stop shop for health checks, advice and guidance to anyone concerned about diabetes and the impact it can have on people’s lives.

The second charity is the Royal Anglian Benevolent Charity, which has a proud history with the Royal Leicestershire Regiment. The charity supports people who are injured in the line of duty, many of which have long-term disabilities or who for a variety of reasons fall on hard times when they leave the forces.

Cllr Bajaj is married to Shallu and they have two sons and a daughter. She will be Lady Mayoress to Cllr Bajaj, who will also be supported by his mother, Nisha, as his consort.

Throughout his year of office, Cllr Bajaj will be appointing a number of different spiritual advisors from key faith groups representing the city’s diversity, including representatives from the Christian, Hindu, Jewish, Muslim and Sikh communities.

Cllr Bajaj said: “I am delighted to be taking on the role of Lord Mayor of Leicester and I’m very much looking forward to supporting the local people who add so much to our communities.

“Leicester is very important to me, so it is an honour to have the opportunity to serve this wonderful city.”