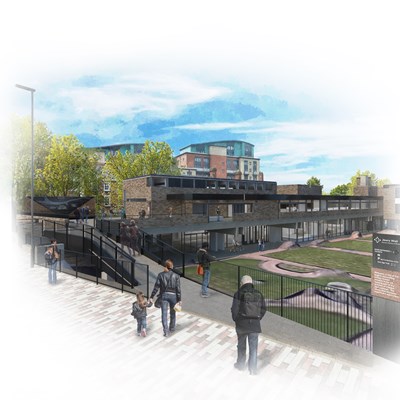 WORK is underway on the first stage of an ambitious project to transform the site of Leicester’s biggest Roman ruins into a world-class visitor centre.

Jewry Wall Museum, which opened in 1966, is home to one of the UK’s tallest civilian Roman structures, along with the impressive remains of a Roman bathhouse.

The museum closed to the public in 2017, and designs were drawn up for a newer, revamped visitor attraction, housed in both the existing Jewry Wall Museum and adjoining former Vaughan College buildings which the city council bought in 2015.

Building work on the first phase is taking place, including the creation of a new walkway to provide level access to the former Vaughan College entrance from St Nicholas Circle along with refurbishment of the windows and roof, and the construction of a new entrance and rear lobby.

This first phase of structural work is costing about £2.9million, and is expected to continue until December 2021. The work will respect the heritage of the Grade II listed building, with features such as the new walkway drawing upon the design features created back in the 1960s by the building’s original architect, Trevor Dannatt.

Hoardings are in place around the site and include viewing points for people to see the work as it progresses.

The work is due to be discussed at a meeting of the city council's Heritage, Culture, Leisure and Sport scrutiny commission this week.

The latest designs for the inside of the planned visitor centre have also been revealed, combining immersive digital technology with items from the city’s Roman collection to bring to life the ancient bathhouse ruins.

Leicester-based Haley Sharpe Design are working with Leicester City Council on how the interior of the new museum will look.

New displays will tell the story of the Jewry Wall site and everyday life in Roman Leicester, immersing visitors as they travel back in time to explore the baths complex and discover other locations at the heart of city life.

Technology will be used to breathe life into the stories of citizens from Roman Leicester – which was known as Ratae Corielavorum – giving visitors the chance to find out what life in the city would have been like nearly 2,000 years ago.

It will focus on themes including Leicester’s place in Roman Britain, life in Roman Leicester, the Jewry Wall baths and Leicester’s archaeological pioneers.

The displays will feature items from the city’s museum collections, including treasures which survived for many years buried under Leicester’s streets and buildings before being rediscovered through archaeological investigations.

The second phase of the project involving infrastructure work such as installing new heating, lighting and electrical work, and creating a new reception area, shop, café, gallery and meeting rooms, is due to be completed by September 2022.

The final stage of work will involve creating and installing the exhibition displays themselves.

The project is expected to be completed in spring 2023, at a cost of around £15.5million, with £2.5million provided by the Leicester and Leicestershire Business Rates Pool fund.

Leicester City Mayor Peter Soulsby said: “I’m really pleased that work is underway on this exciting project to showcase what is such as major part of Leicester’s Roman history.

“Tourism is a vital part of the city’s economy, bringing in millions of pounds every year, and we are planning for the future by carrying out this work now, so that we can help ensure that visitors return once again to the city when they are able to do so.

“There is no other similar dedicated Roman visitor site within 80 miles of Leicester, and these remains of the Jewry Wall and Roman bathhouse are worthy of being part of a substantial, and up to date, visitor attraction.

“Vaughan College itself is a listed building, and is also deservedly being put to better use as part of this overall scheme.

“As well as fitting out the both buildings, this project is also an investment in the fabric of the buildings themselves to ensure they are brought up to a standard to be used and enjoyed for many years to come.”

The planned new café on the site will overlook the Jewry Wall and will be open to all visitors. The main lecture hall on the upper floor is intended to be both part of the museum experience when the attraction is open, and capable of staging meetings, performances and other events during the evenings when the museum is shut.

Leicester deputy city mayor for culture, leisure and sport, Cllr Piara Singh Clair, added: “There has been a longstanding desire to improve the Jewry Wall site, and to make it an important part of the city’s tourism offer.

“The last 12 months of nationwide coronavirus restrictions has hit everyone hard, but over the coming months they are being steadily eased, and we expect visitors to once again be able to return to the city.

“Investing now means this site will be ready to make a vital contribution to the recovery of the city’s economy when the time comes.”