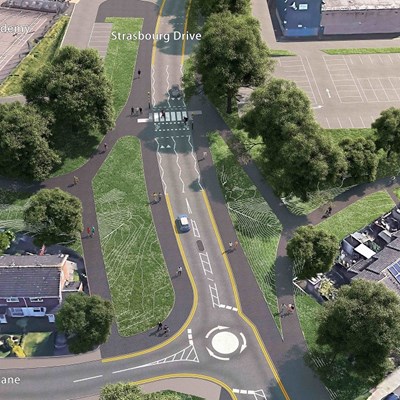 A DINGY underpass is set to be removed as work begins on a range of improvements to a busy neighbourhood road in Leicester.

Leicester City Council will start work on Monday (19 April) to remove Lismore Walk beneath Strasbourg Drive, in Beaumont Leys. The work is part of a wider scheme to help make the busy route safer and more attractive to pedestrians and cyclists.

The underpass will be filled in and the area will be re-landscaped to create new shared footpaths and cycle routes to the north and south of Strasbourg Drive and a new parallel crossing for pedestrians and cyclists will be installed.

Footpaths will be widened, new planting will take place and some road resurfacing will also be carried out as part of the improvement scheme.

Deputy city mayor Cllr Adam Clarke, who leads on environment and transportation, said: “The existing underpass is fairly grotty and not at all welcoming. By replacing it with a much more attractive and safer route, we hope to encourage more people to walk and cycle.

“It is an important part of the Connecting Leicester Neighbourhoods Project, which will see new investment to upgrade existing walking and cycling routes linking key workplaces, schools and shops in Beaumont Leys.”

The £450,000 scheme will be paid for through the Transforming Cities Fund following the council’s recent successful bid for £32million of second tranche funding to support improvement to public transport and support more cycling and walking in the city.

Work is expected to take around four months to complete.

Lane restrictions with temporary traffic signals,will be in place on part of Strasbourg Drive throughout the works

Farrier Lane will also be closed at its junction with Strasbourg Drive. Diversions will be in place.

Any temporary footpath closures will be well-signed with suggested alternative routes.

Leicester City Council is carrying out an ambitious £80million citywide programme of investment in sustainable transport, backed by £40million in total from the Department for Transport’s Transforming Cities Fund (TCF). The package of work will focus on major sustainable transport improvements to provide attractive choices for people to get to work, education, local and other facilities supporting the city’s growth and deliver on the council’s climate emergency, air quality and healthy living commitments.

Match funding is being provided through the city council, Leicester and Leicestershire Enterprise Partnership (LLEP), local bus operators and other partners.

Schemes include the development of new bus priority corridors linking the city centre to city neighbourhoods and suburbs, and the continued development of a network of high-quality cycling and walking routes throughout the city building on the success of Connecting Leicester. It will also see the introduction of electric buses onto the Park and Ride Services and a new electric bike hire scheme in partnership with Santander.