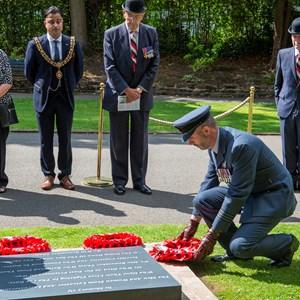 A MEMORIAL stone commemorating those who were taken prisoner in the Far East during the Second World War has been officially dedicated at a ceremony.

The stone was commissioned by local members of the charity Children and Families of Far East Prisoners of War (COFEPOW), following a campaign to erect a memorial for those who fought, died or were made prisoners of war in the Far East, as well as those who returned home and continued to suffer as a result of their treatment in captivity.

The memorial stone was originally installed earlier this year in Peace Walk, near Leicester’s Arch of Remembrance in Victoria Park.

A service dedicating the stone took place on Tuesday, August 10, in the presence of Leicester Lord Mayor, Cllr Deepak Bajaj, along with COFEPOW co-ordinator for Leicestershire Shirley Barnes, and a small number of guests.

Originally it was due to be formally revealed to coincide with the 75th anniversary of VJ Day in August 2020, but was postponed due to the coronavirus restrictions.

Huge numbers of men, women and children died in the fighting or as civilian prisoners between 1941 and 1945. Many of those who survived their wartime ordeal were left in poor health for the rest of their lives, suffered nightmares, and often died young due to the malnutrition, disease and ill treatment endured while prisoners of war.

Councillor Bajaj said: “The Second World War affected many thousands of lives, both among the armed forces and amongst the civilian community, but the hardship and suffering endured by those in the Far East is often overlooked and they are frequently referred to as the ‘Forgotten Army’.

“Families were destroyed and many of those returning from the Far East were permanently scarred by their experiences.

“This memorial stone provides the opportunity for us to remember their sacrifices and will hopefully bring some comfort to their families that they are not forgotten.”

COFEPOW’s Shirley Barnes added: “Those who fought in Burma were called the Forgotten Army, but those who fought in the earlier Malaya Campaign, many of whom were taken prisoner alongside thousands of civilians, have been completely forgotten by this country.

“Hundreds of local men and women were taken prisoner in early 1942 and endured three and a half years of brutal captivity.

“Many died as a result of their treatment. Of those that returned home, many more died young because of the brutality they endured. They were told not to talk about what they had been through, and most never did.

“There are very few memorials anywhere in the country to those who were caught up in the war in the Far East.  It is to Leicester’s great credit that the tremendous contribution made by these men and women has finally been commemorated”.

The city council’s Armed Forces Champion, Cllr Vi Dempster, said: “We will always be eternally grateful for the sacrifices made by our servicemen and it means a huge amount to our community that those servicemen are not forgotten.

“Thank you to all the volunteers who brought this project to fruition, and in particular to Shirley Barnes for her enthusiasm and drive in accomplishing this campaign.”

Further information on the Children of Far East Prisoners of War is available here: www.cofepow.org.uk