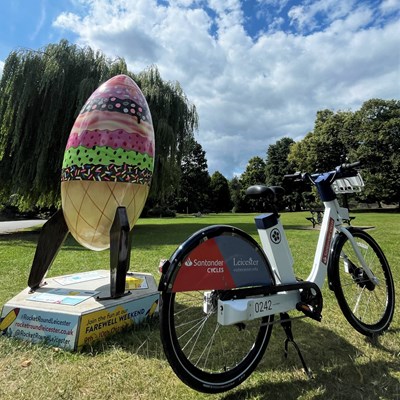 Every Wednesday, free rides on Leicester’s new fleet of e-bikes, courtesy of BID Leicester, are available to the first 200 people to email support@rideonleicester.com. They will then get £5 of credit added to their account, to be used on a Wednesday between 25 August and 29 September inclusive.

You can nominate which Wednesday you would like your credit for by quoting the appropriate code:

The offer is available to both existing users of the scheme and new users, who can register at rideonleicester.com.

The bikes are a great way of getting around the city to check out Rocket Round Leicester, the city’s popular sculpture art trail, hosted by local charity LOROS and on display throughout the city until 26 September. How many of the rockets can you see as you ride round the city? You can pick up a trail map from the Rocket Round Leicester hub, a pop-up shop in the Highcross shopping centre.

To celebrate Rocket Round Leicester, there will also be free guided rides taking place. On Sunday 29 August, as part of the regular monthly Open Streets festival celebrating Leicester’s people-friendly streets, there will be a Rocket Round Leicester guided ride starting at 1.30pm from the Town Hall bike park. You can get free credit added to your Santander Cycles Leicester account for use on the 29 August too, so people will be able to complete the ride on a hired e-bike, for free! Simply email support@rideonleicester.com and quote the code BIDRRL29.

Deputy city mayor Cllr Adam Clarke, who leads on environment and transportation, said: “Our Santander Cycles Leicester e-bikes have been hired more than 26,000 times since we launched, with more than 13,000 people signed up. But we want to make sure even more people get the chance to try out one of these bikes and discover what a fantastic, low-cost, healthy and environmentally beneficial means of transport they are.

“We’re grateful to local businesses which have backed this initiative through BID Leicester, the organisation that supports initiatives to get people into the city centre for shopping and leisure. BID Leicester has funded these free rides, which we hope lots of people will be able to make use of.”

To find out more about the guided Rocket Round Leicester ride on Sunday, visit https://letsride.co.uk/rides/ride-leicester-rocketroundleicester-south-led-ride