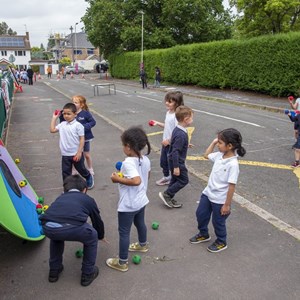 TRAFFIC measures put in place to improve pedestrian safety on roads outside eight Leicester schools could be made permanent.

Work was carried out during the 2020 Covid-19 lockdown to widen pavements, improve pedestrian access and reduce traffic flow outside a number of city schools, under measures to create safer spaces for people to walk and cycle at the beginning and end of the school day.

The improvements have created quieter and safer streets by cutting traffic congestion, and now the city council is proposing to make the changes permanent.

Initial consultations with schools, ward councillors, emergency services and local bus companies have taken place looking at bringing in permanent measures at eight schools in seven areas of the city.

Streets outside three schools would be completely closed to all vehicles during the morning and afternoon school run times – these would include Bridge Junior School in North Evington, Sandfield Close Primary in Troon ward, and at St Thomas More School in Knighton.

At the same time, work would be done to formalise the existing “School Keep Clear” markings outside schools, and bringing in a number of single yellow and double yellow line restrictions to complement some of the one-way streets and school street closure works, and to tackle pavement parking.

Leicester deputy city mayor for transport and environment, Cllr Adam Clarke, said: “The original temporary measures were brought in during the summer of 2020, as part of Government regulations allowing councils to take action to enable social distancing while people walked, cycled or queued at the school gates.

“We’ve been monitoring the effects on both pedestrian and traffic movements since that time, and the schemes have been generally welcomed by the schools and parents. There’s been a positive effect in terms of reducing traffic movements and cutting congestion within these residential areas near to schools, which in turn improves safety and air quality.

“We therefore would like to make those improvements permanent, at the same time as formalising the School Keep Clear markings, to ensure they are enforceable, and also to adjust a number of single and double yellow lines where needed to improve safety and to tackle issues such as motorist who persist in parking on pavements.”

In total the work to make the measures permanent would cost around £90,000, funded by the city council’s Transport Improvement Works capital budget programme.

The next stages would include a public consultation on the proposals, and drawing up the formal traffic regulation orders needed to bring in the measures permanently. If approved the measures could be in place by mid 2022.

“It has made our families feel much safer as they bring their children to and from school. It has also helped boost the number of children walking, cycling and scootering to school.

“Hopefully it will have had a big impact on helping to reduce the air pollution near school each day."