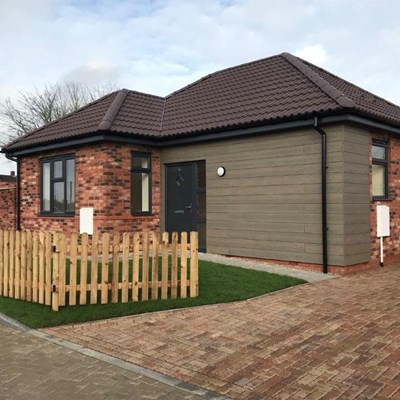 NEW homes created in the latest phase of a major house-building scheme by Leicester City Council have been completed.

The five detached bungalows have been completed at Rosshill Crescent, Thurnby Lodge, including one designed to be accessible by people with disabilities.

They are part of a ground-breaking project by Leicester City Council to deliver hundreds of affordable rental homes for families across the city. The first stage involves 29 new homes being built at six sites in the city, with more than 300 new council homes being created over the next few years.

Work is also progressing on council house building at sites in Netherhall and Beaumont Leys, which between them will create a range of semi-detached and detached homes, bungalows and wheelchair-accessible properties.

The next phases of the scheme will see more new affordable rental homes being built at the former Saffron Velodrome site and on land off Lanesborough Road, in Rushey Mead, as well as work to identify further sites.

Leicester assistant city mayor for housing, Cllr Elly Cutkelvin, said: “This ambitious programme of building new council houses is essential in taking a step closer to meeting the city’s housing needs, and replacing stock lost to the Right To Buy scheme over the last few decades.

“We are taking a lead role in creating this much-needed new affordable council housing. It is very encouraging to see this latest phase of work completed, meaning these homes can be brought into use."

Work at the five remaining phase one sites is due to be completed this year.

At Brocklesby Way, in Netherhall, one detached house is being built, along with one wheelchair-accessible bungalow, while two new bungalows are due at a site at nearby Maplin Road.

Twelve new homes in six semi-detached pairs are being created at Felstead Road in Abbey Ward, which are due to be ready for occupation at the end of March 2021.

Work on the phase two sites could be underway by autumn 2021.