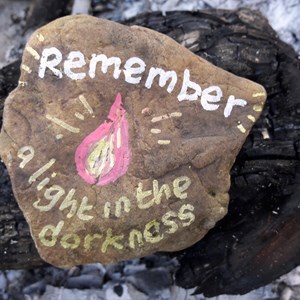 ARTWORK created by people from across Leicester will form part of commemorations for this year’s Holocaust Memorial Day.

On January 27 each year, the event gives a chance for people to reflect on genocides around the world, from the Nazi persecution of Jews in the Second World War, to more recent atrocities in Bosnia, Rwanda, Darfur and Cambodia.

Due to the ongoing Covid-19 restrictions, the usual commemorative event held at the University of Leicester’s Fraser Noble Hall cannot take place. A range of virtual commemorations are planned instead.

As part of that, people are being asked to contribute their own artwork or personal photographs on this year’s theme of “Be The Light In The Darkness”, for inclusion in a planned online exhibition and social media by Leicester City Council.  Artwork should be submitted before January 17, 2021, via email to lord.mayor@leicester.gov.uk

People are also invited to decorate a stone or pebble with words, pictures and messages of hope and reconciliation, as part of the Foundation Stones project, with a view to them being included as part of a national UK Holocaust Memorial and Learning Centre in London.

An online workshop to make the stones is scheduled to take place on January 20, run by the organisation Big Ideas Company, which will also include brief talks by representatives of four partner UK museums, including Leicester Museums and Galleries.

The two councils’ websites are also due to host Holocaust Memorial Day webpages, which will include video clips of local students talking about their research and experiences of visiting the notorious Nazi death camp at Auschwitz, as well as an online talk by renowned historian Professor Aubrey Newman, who founded the University of Leicester’s Stanley Burton Centre for Holocaust Studies.

Leicester Lord Mayor Cllr Annette Byrne said: “Holocaust Memorial Day is a chance to remember those who have died in past genocides, and also to recognise the lives touched by the impact of other more recent atrocities across the world.

“It is a chance for reflection, and an opportunity to remember these lessons from history.

“We hope that by inviting people to take part in submitting artwork and photographs it will still provide an opportunity to get involved and share in this poignant annual commemoration.”

Artwork and photos acceptable for inclusion should portray people caught up in the Holocaust with sensitivity, focusing on the lives and livelihoods that were taken from them.

“We recognise the Holocaust shook the foundations of modern civilisations, and believe it should have a permanent place in our memory.

“As a result, the organising committee has been busy preparing a virtual commemoration which we hope people will access.”

The events locally are part of international Holocaust Memorial Day commemorations, details of which can be found here.

More information about the Foundation Stones project is available here.