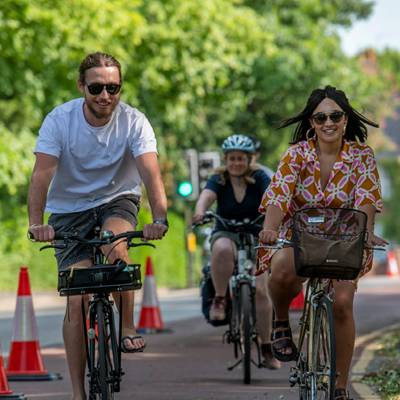 ALTERATIONS are due to be made to a citywide network of pop-up safe cycling, walking, and social-distancing measures which were introduced during the Covid-19 lockdown in 2020.

With Government restrictions due to come to an end and traffic patterns changing, a number of changes are being made to the network of temporary cycle routes which were installed on key commuter roads.

Some will be improved and made permanent as part of the wider cycle route network including pop-up schemes at Braunstone Lane East, Evington Lane and Aylestone Road.

The city’s first keyworker corridor which includes cycle routes in Aylestone Road and Saffron Lane, will be retained and improved. The route was created at the start of lockdown in spring 2020 to help NHS workers and other critical staff to commute safely while bus services were not running.

Projects at Braunstone Gate and Queens Road, which have helped improve cycle access and create pedestrian-friendly areas by widening pavements to accommodate outdoor seating, will remain in place, with work taking place to replace the red and white barriers with less intrusive black and white markers, along with some small changes to help with parking and loading.

Proposals will also be developed to improve them further and to maintain the benefits, while addressing local concerns over parking and through traffic.

Further engagement work will take place in both areas with retailers, businesses and residents to further improve the streets, provide more pleasant spaces for shoppers, give more priority to cycles and pedestrians and to remove unnecessary traffic.

Similarly, measures in Granby Street to provide more space for outdoor café seating will also remain in place, with markers to define the cycleway replacing the current barriers, ahead of wider plans to improve the area including the pedestrianisation towards St George’s Way and shopfront improvements.

At the permanent inbound cycle lane on London Road, cyclists will still be able to use the bus lane and wand markers will remain in place to mark out the route on other sections, with plans being developed for a permanent inbound route in future.

The pop-up measures in Beaumont Leys Lane will also be retained as part of wider plans to introduce safer cycling infrastructure.

The pop-up social-distancing measures which are no longer required at Evington Road, Green Lane Road, Hinckley Road and Belgrave Road are due to be removed over the weekend and into next week.

Monitoring at 14 key count sites across the city showed that numbers of cyclists nearly doubled between May 2019 and May 2020, as key workers chose alternative ways to travel and people chose to cycle for exercise in response to the coronavirus lockdown.

The installation of dedicated cycle lanes on some routes has seen a huge rise in the numbers of cyclists using them. For example, the introduction of a segregated cycle lane on London Road saw cycling numbers increase from about 300 a day to over 850 a day by April 2021.

Similarly, the cycle route on Welford Road near HMP Leicester saw the number of cyclists rise from 230 a day before it was installed, up to 726 a day by 2019.

Across the city, the cycle route network attracts about 18,000 cycle journeys each day.

Peak-time figures for pop-up cycle routes on Saffron Lane and Aylestone Road, which were introduced to help keyworkers get around safely during lockdown, saw around 100 cyclists per hour using the Saffron Lane route and around 70 using the Aylestone Road route by October 2020.

Leicester deputy city mayor for environment and transport, Cllr Adam Clarke said: “Many of these measures were put in place rapidly as part of the city’s Covid-19 response during 2020, and the lifting of all Government restrictions means we can look at which of the schemes would be beneficial to keep and develop further, and which can be removed or amended to allow the roads to revert to their original layout.

“I’m really pleased that we will be retaining, and making permanent, the first key worker corridor which we installed on Aylestone Road and Saffron Lane at the time when bus services weren’t running or were reduced. Replacing these pop-up lanes with permanent features on the footway will free up the bus lanes and benefit public transport on these routes.

“The monitoring work across the city has given us valuable insight into how many people use these key routes and where there might be a need for more permanent cycling and walking infrastructure – something we can take into account as part of the city’s approach to encourage alternatives to car travel.”

The pop-up cycling and walking infrastructure was introduced as part of the Leicester Covid-19 Transport Recovery Plan, which was published in June 2020 setting out the priorities to help combine the city’s economic recovery with the needs to ensure safe, sustainable transport.

Leicester City Council also has a package of nearly £80million, including funding from the Government's Transforming Cities Fund, to spend on a range of major projects. They include developing better walking and cycling links, launching the UK’s largest e-bike sharing scheme and upgrading park and ride buses from diesel to electric.

By December 2020 Leicester’s extensive cycle transport network totalled 235km of cycle facilities, with more than 100km of this either within the footway or entirely segregated from pedestrians and other traffic.