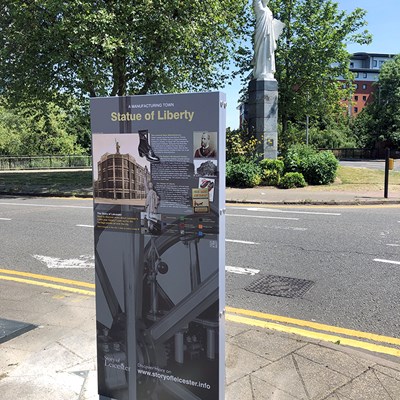 THE ONE–TIME home of a famous Leicester family, the site of Leicester’s Art Deco dairy, and the story of Leicester’s very own Statue of Liberty are all featured on new heritage panels produced by the city council.

Nine new panels have recently been installed around the city, including on Sparkenhoe Street – home to one of England’s biggest workhouses in the 19th century – and on Belgrave Gate, close to where the Savoy Cinema once stood.

The story of Leicester dairy Kirby & West is remembered on a new panel on Western Boulevard, where the company’s distinctive Art Deco premises once stood. From humble beginnings in the 1860s, the dairy was processing and bottling more than 17,000 gallons of milk every day by the 1960s.

On Upperton Road, a new panel tells how a visit to New York inspired a name-change for Leicester-based Lennards shoes – and gave Leicester its very own Statue of Liberty. After changing its name to Liberty Shoes, the company commissioned a replica of the Statue of Liberty to stand atop its smart new factory. When the factory was demolished, the statue was preserved – and Liberty was moved to a nearby traffic island in 2008.

Two panels highlight buildings associated with the Gimsons – the Leicester family of engineers and designers who had a huge influence on the city.

Number 4 Belmont Villas – now part of the Belmont Hotel – was home to Josiah Gimson, founder of the engineering company Gimson & Co, from 1870. His son, Ernest ­– who also lived in the property – went on to become a key member of the Arts and Crafts movement.

Sydney Gimson, Josiah’s eldest son and a prominent member of the Leicester Secular Society, is remembered with a panel at 20 Glebe Street in Highfields, where he lived from 1889 until his death in 1938.

Other new panels feature the landscape designers and architects who created Abbey Park and its buildings, the architect Isaac Barradale, who had his practice at 5 Grey Friars, and Israel Hart and Joseph Levy, whose clothing business operated from the state-of-the-art Wimbledon Works from 1870. Hart & Levy are remembered in a panel on Southampton Street.

As well as the nine new panels, there’s been an update to the heritage panel at the King Power Stadium, which now proudly includes a reference to Leicester City’s historic FA Cup win in May this year.

City Mayor Peter Soulsby said: “When we created our first heritage panels back in 2014, we unlocked Leicester’s hidden history and presented it in an easy-to-read way – making the panels instantly popular with both local people and visitors.

“Like all the others in the collection, these new heritage panels are a simple, effective and entertaining way of ensuring that we don’t forget our city’s unique and fascinating past.”

Leicester’s heritage information panels can be seen in shopping centres, on medieval churches, near former warehouses and in front of the city’s iconic landmarks such as the Clock Tower and Corn Exchange.  They can also be seen in Leicester’s historic villages, including Aylestone, Belgrave and Evington.

Since 2014, a total of 142 heritage panels have been installed across Leicester.

The panels are part of the Story of Leicester project, which celebrates the city’s 2,000-year history by remembering the people, places and events of Leicester’s recent and distant past.