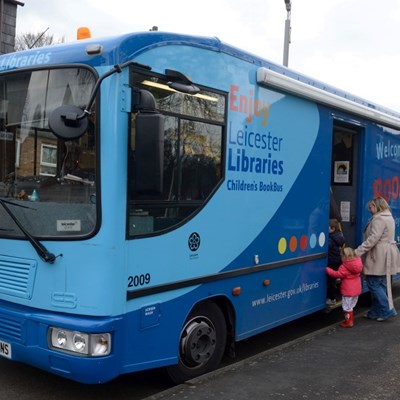 LEICESTER’S Bookbus service is to go electric as part of the city council’s commitment to tackling the climate emergency.

Two ageing diesel Bookbus vehicles will be replaced by one zero-emissions electric Bookbus, contributing towards the council’s commitment to making Leicester a carbon neutral city by saving 10 tonnes of CO2 emissions per year.

The change is being implemented after a consultation process carried out last year, in which there was strong support among BookBus users for bringing in an ultra-low emissions vehicle (ULEV).

Under the new plans, the children’s Bookbus service will retain all its weekly stops in city neighbourhoods, making sure that children aged 0-11 in identified areas of the city continue to get a weekly visit. The Bookbus targets areas where a library is not within easy walking distance.

Because the service would be moving from two vehicles to one, there would be changes to the Early Years Bookbus provision, which currently visits early years settings such as nurseries, preschools and playgroups three times a year, offering extended loans and storytelling. This would change to one visit per year, with extended book loans to be provided through the nearest library or children’s centre rather than through a Bookbus.

In addition, in response to some feedback from the consultation, more stock would be bought, particularly in other languages.

The Bookbus would continue to play a prominent part in festivals and events in Leicester.

Assistant city mayor for neighbourhoods Cllr Kirk Master said: “We’re making some important commitments with this plan. We’re committing to a continued Bookbus service, with weekly stops much the same as before. But we’re also committing to tackling the climate emergency, and I’m delighted to hear than our plans for an electric bus have had such positive feedback in our consultation. We’ll be the first council in the East Midlands to switch to an electric Bookbus.

“We’ve also taken on board the feedback from early years settings and we are determined to continue to support these groups, offering them storytelling training and access to a wider range of books. But it just doesn’t make financial or environmental sense to run two Bookbuses when we can switch to one in this way and make an important contribution to our Climate Emergency Action Plan at the same time.”

Estimates show the cost of a new electric vehicle – at around £230,000 - will be less than the cost of replacing two diesel vehicles, at £130,000 each. The current vehicles in use are both over 12 years old.

In addition, a £40,000 grant from the ERDF, the European Regional Development Fund, has been secured towards the purchase of an electric bus, meaning it will cost the council an estimated £70,000 less to buy one electric bus than to replace the two diesel vehicles with new diesel models.

Deputy city mayor Cllr Adam Clarke, who leads on environment and transportation, added: “This is a great example of how we are taking the principles of our Climate Emergency Action Plan and implementing them across all council services, capitalising on opportunities to make the ‘greener’ choice whenever we can.

“This follows the introduction of electric buses on our park and ride routes, plus the purchase of electric vehicles for use by the city council – a policy we will be extending as we continue to decarbonise our fleet.

“Replacing these vehicles with a new electric Bookbus is a sustainable option that will contribute to reducing carbon emissions, improving air quality and making Leicester a greener and healthier place to live – while maintaining a service that we know is important to many people.”

The children’s bookbus service has just started up again, offering a temporary timetable of weekly stops at streets across the city. Currently, there are plans to use the Early Years Bookbus as a mobile testing centre to support Leicester’s response to coronavirus.

It is hoped the new electric Bookbus service could be in place from summer 2022.

For more details on how Leicester is tackling the climate emergency, see www.leicester.gov.uk/climateemergency