Owners notified of next stage to make safe collapsing wall 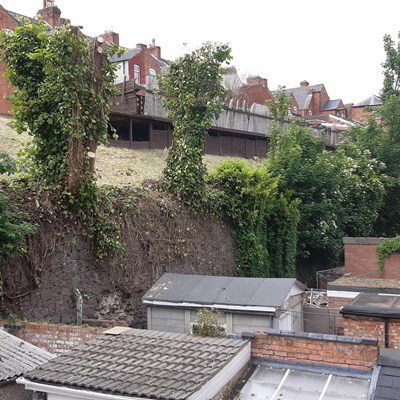 OWNERS of a wall in Halstead Street, Leicester, are being updated on work needed to protect lives and properties from the six-metre high wall which is at risk of collapse.

The 100 year-old wall runs along the back of the privately-owned properties, and in some cases is only inches away from outbuildings and extensions to the row of terraced houses.

The city council has already evacuated four households closest to the area of concern on Halstead Street.

A further nine households were asked to leave their houses during working hours until Wednesday of this week, so that a large crane could operate above their homes to clear trees and shrubs from the wall and install a monitoring station.

The city council has found alternative accommodation and a place to stay during the day for those who need it. It’s also put in place a dedicated residents’ liaison officer to support all of those affected.

Once the vegetation is cleared, structural engineers can get a closer look at the wall which is being closely monitored for any changes. They will then consider if the wall can be pinned back to repair it and stop it crumbling further.

This may require the removal of any other structures immediately in front of the wall, including outbuildings, but every effort will be made to avoid this.

The city council is carrying out the emergency works to protect lives, but residents and landlords who own the properties and are responsible for the upkeep of the wall will be required to pay for the work being done.

This has previously been raised with the residents and landlords, who have been advised to contact their insurance companies, and to put them in touch with the council’s building control officer.

Today the council has served official notices which set out the powers it has used and advise that the costs of the work could be set against the properties concerned until they are paid.

The council has asked Citizens Advice Leicestershire to provide independent advice to the owners of the wall should they need it.

John Leach, the council’s director of environmental and neighbourhood services said: “The city council has acted quickly to protect lives and properties and to bring in the experts needed to deal with this emergency situation.

“However, it would not be right for council taxpayers to foot the bill for this work, which is the responsibility of the property owners. We appreciate this is a very difficult situation  and are advising residents to speak to their insurance companies and to seek independent advice if they wish to.

“We have spoken to the owners where possible, and written to all of them to set out the support available, and will continue to offer as much help as we can during what is undoubtedly a very unsettling time.”

It’s not yet known how long the work will take, but it’s expected to be several weeks. The council is expecting an update from the structural engineers working on the wall at the beginning of next week.