Summer programme of bands on parks to begin 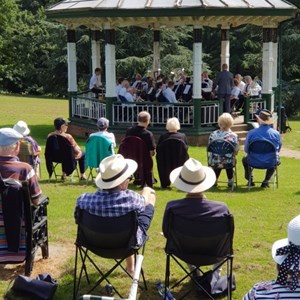 PARKS across Leicester will come alive with the sounds of brass bands this summer in a series of outdoor concerts each weekend.

Leicester City Council’s Bands on Parks programme will see entertainment ranging from jazz bands to brass and silver bands throughout the city and county performing free concerts in the open air over the coming months.

The programme runs every Sunday from July 25 until the end of September, with performances taking place from 3-4pm.

The New Orleans Hot Shots Jazz Band will get the party started at Western Park on Sunday, July 25, arranged by Letchworth Area Watch, while at the same the Syston Jazz Band will perform at Victoria Park.

The following Sunday, the Hathern Concert Brass and Youth Band will play at Monk’s Rest Gardens, on August 1, followed on Sunday, August 8, by a performance by the Southfields Concert Brass band at Aylestone Hall Gardens.

Into September, and events will get underway on Sunday, September 5, when the Enderby Concert Band perform for visitors at Knighton Park, followed the weekend afterwards by Fleckney Silver Band at Western Park, on September 12.

Leicester deputy city mayor for culture, leisure and sport, Cllr Piara Singh Clair, said: “The city’s parks are beautiful open spaces throughout the city, enjoyed by thousands of visitors in all seasons, and have been something of a lifeline for people during lockdown as a place to get some fresh air and exercise.

“Live music in the open air is a wonderful addition to any visit, and I’m delighted we are able to run our Bands in Parks programme of events once more this year.

“These free concerts are a chance to see and hear the best local brass, jazz and community bands bringing their own special vibe and atmosphere to the city’s green spaces this summertime.”