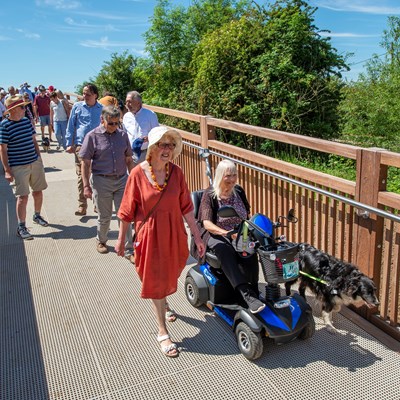 WORK has been completed on a new pedestrian and cycle-friendly ramp linking part of the Great Central Way and the Grand Union Canal in Aylestone.

Until now, the only way to get between the Great Central Way and the lower-lying Marsden Lane car park, Grand Union Canal and route to Aylestone Meadows has involved climbing a steep set of steps up the side of an embankment.

The structure now provides a more easily-accessible route suitable for wheelchairs and cycles, to improve connectivity with the city’s cycling network.

The project was funded by the Local Growth Fund (LGF) – a pot of money set aside by the Government for environmental improvements, accessibility works and projects which help the local economy, and which was administered through the Leicester and Leicestershire Enterprise Partnership (LLEP).

The ramp was officially opened in a socially-distanced event on Tuesday, June 8, including some of the key local campaigners involved in making it a reality.

Leicester deputy city mayor for environment and transportation, Cllr Adam Clarke, said: “I am so pleased that this scheme has come to fruition, some 18 years after it was originally proposed.

“It might look fairly straightforward, but in reality it has taken a lot of feasibility and design work to find the right solution which could be done in a cost-effective way.

“The Aylestone Meadows Appreciation Society have been key players in driving this whole project forward.

“The embankment between the Great Central Way and the canal paths is particularly steep at this point, making it really hard to access by people using cycles, wheelchairs, pushchairs or anyone with mobility problems.

“Now this ramp has been installed and is ready for use, it opens up access to the Great Central Way, Aylestone Meadows and Aylestone Village – and means people can get from the Aylestone area to elsewhere, such as Glen Parva, Everards Meadows, Blaby, the West End, the city centre and beyond.”

The ramp scheme took place at the same time as flood mitigation works to protect nearby properties from flooding, including raising ground levels around the perimeter of the Marsden Lane car park, at Aylestone Meadows, and installing devices in surface water drainage pipes to prevent river water from flooding into them and affecting nearby houses.

The Environment Agency provided £32,800 of funding towards the cost of these works. Together, the ramp and flood alleviation works cost just over £500,000.

Both schemes were carried out by local contractor Oliveti Group, whose head office is based at Meridian Business park, and whose workshop staff in Enderby were responsible for building the three-metre wide, timber and steel ramp.

The Marsden Lane Ramp is part of a series of projects along the River Soar and Grand Union Canal corridor to improve access and connectivity, alongside flood mitigation measures.

The five-year project is supported by a £7.5m of funding from the Local Growth Fund, a pot of government funding awarded to the Leicester and Leicestershire Enterprise Partnership Limited (LLEP) for projects which improve the local environment, the city and its economy.

Kevin Harris, Chair of the LLEP Board of Directors added: “Our £7.5m Local Growth Fund investment has seen the River Soar and canal area across the city transform.

“The improvements for both pedestrian and cycle connectivity have made the area an attractive and easy place to visit, supporting the local leisure and tourism economy.

“Tourism is one of our key industries here in Leicester and Leicestershire, and our waterways are one of our hidden gems.

“It’s great to see this project completed, as it will make the area even more attractive to visitors. This will in turn will boost the local economy as footfall is increased and more people take advantage of a wonderful part of our region.”

Oliveti Group are long-standing members on many of the city council’s construction contracts and frameworks, and are proud to be part of the Marsden Lane ramp project.

Managing Director Gian Oliveti said: “Oliveti Group are a local company and very proud of the service we provide for our city.

“On the Marsden Lane Ramp project, in collaboration with Leicester City Council, we have created what we know will be a benefit to the environment and something all members of the local community can enjoy for many years to come.”