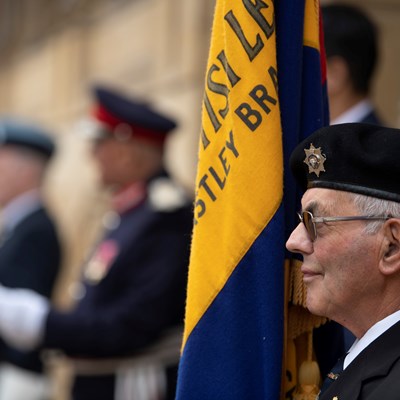 Leicester and Leicestershire will be paying tribute to the armed forces community with a digital celebration to mark Armed Forces Day 2021.

The ongoing coronavirus restrictions mean that the traditional cathedral service, parade through the city centre and flag-raising events cannot take place in their usual format.

Instead, the city and county councils, together with the Lieutenancy Office and local Armed Forces units, have again worked together to come up with an alternative way to celebrate Armed Forces Day.

The national event takes place on Saturday, June 26, when the country comes together to show its appreciation and support for those within the Armed Forces community, including serving troops and their families, reservists, veterans and cadets.

A new webpage has been created, with content paying tribute to servicemen and women, including a video from the Lord-Lieutenant’s Army Cadet, Lance Corporal Saxon Nugent, footage from the 2019 Armed Forces Day parade and a live stream link to the Armed Forces Day service being hosted in Leicester Cathedral on 26 June, which can be viewed through the cathedral’s website.

In the city, commemorations included a flag-raising event on Monday, June 21 at the Town Hall in the presence of the Lord-Lieutenant and the Lord Mayor of Leicester.

A specially commissioned video is available on You Tube which captures a flavour of the work of the members of the armed forces, flag raising at both the city and county and footage of previous parades held in the city centre. It is available here.

Lord Mayor of Leicester, Councillor Deepak Bajaj, said:  “It is extremely important for us to join together to continue showing our support and appreciation to the men and women who serve our country and the valuable work they do, which often goes unrecognised.

“Armed Forces Week provides us the opportunity to celebrate and acknowledge their service to our country and all those who serve, both past and present, should be immensely proud of the contribution they make.”

Councillor Vi Dempster, who is the city’s Armed Forces Champion, added: “Coming from a service family, I am very aware of the work and sacrifices the armed forces make to keep us, and our country safe.

“We will always be indebted to them for their dedication, commitment and courage”.

In the county, the event will be marked by a traditional flag-raising ceremony at Glenfield’s County Hall which has been pre-recorded, and a link to which will be available on the county council’s webpage from Monday, June 21.

This year, the flag was raised by Phil Walden, Chairman of Leicestershire and Rutland Royal British Legion, in the presence of just 20 people, representing serving Armed Forces personnel and veterans.

Leicestershire is also supporting the national #SaluteOurForces campaign, which calls on people from all walks of life to post pictures and videos of themselves saluting in tribute.

The new webpage has lots of facts about the history of the salute, as well as short video clips from members of all three services demonstrating the subtle differences between their salutes.

The Lord-Lieutenant of Leicestershire, Mike Kapur OBE, said: “We are delighted to be running the #SaluteOurForces campaign again this year. After so much success in 2020, and engagement from so many people across Leicester and Leicestershire, we are looking forward to putting together another impressive and diverse virtual parade.

“This is a simple way for all of us to pay tribute to our local armed forces, not just for what they are doing currently, but for all their hard work, dedication and efforts to keep us safe in the UK and across the globe.”

Leicestershire County Council’s Armed Forces Champion, Pam Posnett MBE, added: “It is a great honour and privilege to once again be a part of this national event to honour our Armed Forces and to show our appreciation for their vital service and dedication.

“Armed Forces Day is a way for us to join with people across the country to show our support for those men and women who currently serve – both regular and reserve – and to remember those who have served in the past.”

The online celebrations for Armed Forces Day 2021 – including information on how to get involved in the #SaluteOurForces campaign – can be found through the county council here and the city council's website here.