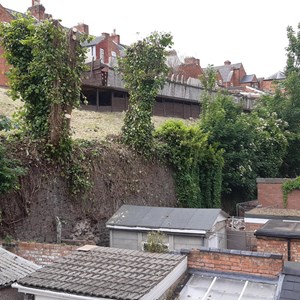 Residents of Halstead Street in Leicester are being asked to leave their homes during the daytime on Thursday and Friday, 24 & 25 June, and Monday and Tuesday 28 & 29 June, to enable the first stage of work to begin to a six metre high wall that runs along the back of their properties.

Structural engineers working for the city council have advised that the wall, which is believed to be more than 100 years old, could be in danger of collapsing and urgent works are needed to protect people and the privately owned properties.

Residents of four properties closest to the area of most concern have already moved to alternative accommodation. The council has now asked a further nine households to leave their homes during working hours for four days, while a large crane is used above the properties to access the wall.

The crane will be used to help to clear shrubs and trees that are growing up and across the top of the wall so that the structural engineers can get a better look at the crumbling structure.

The engineers will also install a monitoring station, which will enable them to keep a close eye on the wall 24 hours a day, and pick up on any sudden changes to its condition.

This work has already taken place at the rear of the properties that have been evacuated.

John Leach, the council’s director of neighbourhood and environmental services said: “We’ve had a team of experienced emergency management officers out talking to residents to tell them what we need to do to protect their homes and keep them safe.

“We’re asking people to stay out of their homes during working hours on the four days specified, and we’ve offered support where it is required.

“We have also given an update to the families who have already left their homes, and assigned a dedicated residents’ liaison officer to support them and the other affected residents of the street.

“We’re sorry for the inconvenience this will cause, but keeping people safe has to be our top priority.”

The city council is trying to establish which properties have responsibility for maintaining the wall, but is using its building control emergency powers to take action now to make it safe.

The council is waiting for an updated assessment from the structural engineers it is working with, after which the next steps will be shared with residents and property owners.