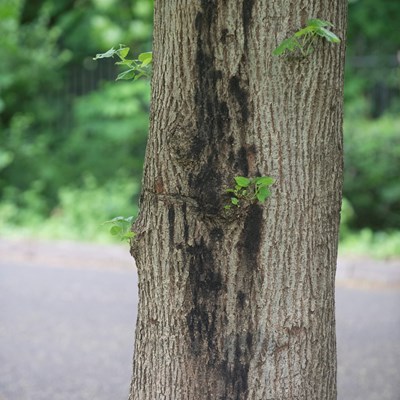 DOZENS of mature trees in a city park will have to be felled after becoming infected with terminal diseases.

Thirty-five of the trees that line the main drive in Western Park, and 20 more elsewhere in the park, will have to be removed to try to contain the spread of a highly infectious disease called Phytophthora and prevent it from infecting the other 10,000 trees in the park.

The disease attacks the tree’s vascular system and eventually kills it, infecting its roots and spreading to neighbouring trees. Large bleeding cankers on the tree show that Phytophthora has taken hold.

Head of parks and open spaces Stewart Doughty said: “This is a particularly nasty disease which has been around for years but which now appears to be progressing much more quickly.

“This faster progression may be a result of climate change, with our milder winters incubating the disease, but we’re also dealing with new pathogens that have arrived in the British Isles comparatively recently.

“There is no cure for Phytophthora, but normally you can minimise the risk of disease transmission by removing the infected tree. But when the diseased trees are close together in clusters, and their roots are intertwined – as they are in Western Park – you have no option but to remove multiple trees to try to stop the disease from spreading.

“By removing these trees, we hope to save the rest of the trees in the drive that have probably stood here since the park was first laid out 120 years ago.

“Having to fell these trees is obviously heartbreaking, but their condition is deteriorating rapidly and some of them already represent a danger to the public. As they succumb to disease, they lose strength and become more susceptible to other infections – and as their structure weakens, major limbs and branches will start to break off and fall.”

Worryingly, Phytophthora is not the only pathogen in the park. The city council will also have to remove five ash trees as a result of ash dieback – a chronic fungal disease that’s already killed a large proportion of the ash trees in the UK and Europe – and parks staff are also seeing the impact of a destructive fungal disease that’s affecting the park’s pine trees.

Red Band Needle Blight – which is on the increase in the British Isles – has attacked a significant number of Corsican and Scots pines in a woodland close to Western Park’s main entrance and in the garden of the former Eco House.

The fungus causes the pine’s needles to develop a distinctive red band, before they drop from the tree. This defoliation weakens the tree and expedites its death.

In Western Park, Red Band Needle Blight has affected 48 pine trees, which will all need to be felled to minimise the spread of the disease to other pine trees in the city.

The impact of these three diseases means that at least 108 trees will need to be felled in the park over the next two years – and while that’s a significant number of trees, the figure represents less than 1% of the total tree stock in Western Park.

The list of affected trees comprises 48 pine, 26 lime, 14 poplar, six sycamore, five ash, three maple, three oak, one cherry, one alder and one cypress – but with the progression of the diseases still unclear, this number could rise further.

Head of parks and open spaces Stewart Doughty said: “While a new tree can’t replace one that’s been growing for more than 100 years, we will do our best to compensate for the loss of these trees.

“In line with the commitment in our tree strategy, we’ll plant more than one replacement tree in Western Park for each tree that’s lost, and we’ll plant them as close to the site of the original tree as possible.

“Where stock is available, semi-mature trees of around 20ft in height will be planted to replace the diseased trees in the main drive.

“All the other trees planted to mitigate the lost trees will be ‘extra heavy standards’, which means they’ll be around 15ft in height.”

The council plans to remove 60 trees – including those in the main drive – at the end of this summer, and will plant the replacement trees in the autumn/winter.

The 48 diseased pine trees will be removed and replaced in autumn/winter 2022/23.

Cllr Adam Clarke, deputy city mayor for the environment, said: “The effect of Phytophthora on the trees along the main drive will be obvious to anyone visiting the park, as the staining and cankers are clearly visible.

“Removing so many mature trees will be hugely upsetting, but we have to fell them before they deteriorate further and become a danger to the public – and to try to stop the spread of this terminal disease.

“As limes seem to be more susceptible to Phytophthora than other species, we won’t be planting more limes in this location. Instead, we’ll be looking to plant a mix of species that will prove more resistant to disease in a changing climate.

“We’ll plant new semi-mature trees along the avenue this winter and will make sure that more than one replacement is planted in the park for every tree that’s lost.

“The rapid acceleration of these three diseases is really concerning, with these deadly pathogens appearing to thrive as a result of climate change, but I hope that by taking this action we can protect not only the other trees that line the avenue and the 10,000+ trees that we have in Western Park, but also limit the spread of these terminal diseases.”

Information boards will be installed in Western Park to help keep local people informed about the works, which are due to get under way in late summer.

Picture caption: Cankers on a lime tree infected with Phytophthora in Western Park