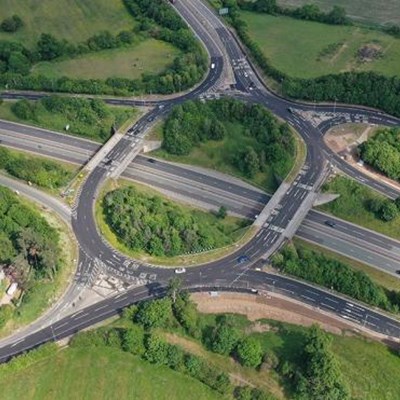 A £10m scheme to tackle congestion and improve road links between Leicester city centre and the rest of the county, has scooped a national award for the considerate way in which the work was carried out.

Improvements on the A5630 Anstey Lane and A46 roundabout in north west Leicester were completed on time and within budget last summer – and the scheme has now been recognised for its high standards.

At the national Considerate Constructors Scheme (CCS) Awards; the project, carried out by Galliford Try on behalf of Leicestershire County Council, scooped the title of ‘most considerate site’ in the £7.5m-£10m bracket.

The county council led on the delivery of the improvements on behalf of the city council with the work, which has improved road links between the city of Leicester and the wider county.

The CCS carries out regular audits to ensure that sites promote a positive image of construction. The National Site Awards celebrate exceptional achievement and recognise those sites that have made the greatest contribution towards raising standards in construction.

Galliford Try, a partner of the CCS, carried out local community work during the Anstey Lane project, including helping a local charity with food donations and supporting a school with its outdoor playing area renovation and a flooding issue.

David Lowery, Managing Director for Galliford Try Highways, said: “As a business we are proud of our record, achievements and collaboration with the Considerate Constructors Scheme and the part it plays in helping to drive standards across our business, which in turn allows us to push boundaries and innovate in new ways.

“Our continued collaboration with our clients centres on delivering lasting benefits to the communities in which we work and continuing to raise the bar across industry. The whole team at Anstey Lane richly deserve this recognition for their efforts, which were above and beyond, and I congratulate them on their achievement.”

City Mayor Peter Soulsby said: “This important scheme has provided vital infrastructure needed to support the growing demands for housing in this part of the city.

“The efficient delivery of such a major and complex project is a credit to the contractors and to the close partnership between the city and county councils. It will provide long-term benefits to residents and commuters.”

The scheme involved turning a single-lane section of road between the A46 interchange and Bennion Road roundabout into a dual carriageway, creating additional lanes at the approach to the roundabouts at both junctions and installing new traffic lights. Pedestrian and cycling routes along the road were also improved.

Leicestershire county councillor Ozzy O’Shea, cabinet member for highways and transport, said: “This scheme of improvements is easing congestion and reducing delays for motorists, as well as providing a safer environment for pedestrians and cyclists. To hear that it has also won an award for being carried out with such consideration and minimal disruption is the icing on the cake and I would like to congratulate all involved.”

The scheme was funded by the city council – as developers of Ashton Green – and Highways England, as well as through part of the £16.2m allocation from the Local Growth Fund, a pot of government funding awarded to the Leicester and Leicestershire Enterprise Partnership (LLEP) for projects which benefit the local area and economy.

Chair of the LLEP board of directors, Kevin Harris, said: “It’s great to see that this latest LLEP investment in our vital infrastructure has been so well-received. When we decided to invest in the Anstey Lane scheme, it was as part of a large project to improve access to the north of Leicester from the wider county. I’m very pleased therefore that the scheme has proven successful and will now open up further investment opportunities for local businesses and home building, whilst ensuring the wheels of our local economy keep turning via decreased congestion on this key transport artery.”