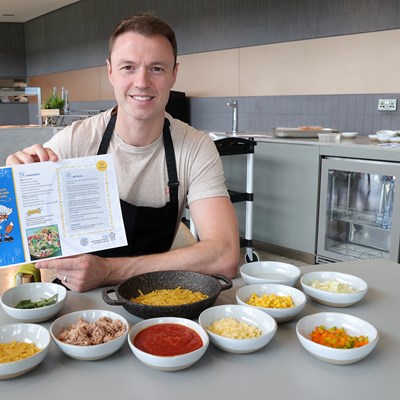 CHILDREN in Leicester who normally have a free school meal won’t miss out over the half-term break, thanks to a holiday food programme that’s supported by Leicester City Football Club and Leicester-based Samworth Brothers.

The city council has teamed up with the Foxes and the food manufacturer to provide families with all the ingredients they need to make five tasty lunches at home, together with simple instructions for making the meals.

Stars of Leicester City – Jonny Evans (pictured), Ricardo Pereira, Ayoze Pérez, Marc Albrighton and Luke Thomas – showed their support for the scheme by swapping their blue kits for some chefs’ whites and cooking up the easy-to-follow recipes in their training ground’s kitchens.

Videos of the players making the family favourites, such as easy-peasy pizza and tuna & vegetable frittata, will be posted on the club’s social media platforms to encourage youngsters to have a go at making the dishes themselves.

The recipes for the five dishes will be included in the food box that eligible families will be able to collect from their schools before term ends on Friday (28 May).

LCFC Chief Executive Susan Whelan said: “Whether it’s beers and mince pies at Christmas, or cupcakes for Khun Vichai’s birthday, giving back and thanking our supporters has always been an important part of our philosophy.

“Our opportunities to do that have been limited in the last year, which has been a time of great hardship for many people in our city and our communities. The holiday food programme allows us to appropriately channel those funds, on behalf of the Club and its fans, to some of those less fortunate in the city.

“We look forward to working with Leicester City Council to enhance such programmes in the future, using the Club’s visibility and expertise to ensure simple, healthy, affordable food is accessible to everybody in Leicester.”

Leicester-based Samworth Brothers produce premium quality chilled and ambient foods – from sandwiches, meals and savoury pastries to salads, cooked meats and snacks – so they were perfectly placed to provide the city council with the carefully thought-out boxes of ingredients that will be turned into nearly 70,000 home-cooked meals next week.

Adam King, Samworth Brothers Community Director, said: “The city council was keen to provide families with a box of both fresh and ambient produce that could easily be cooked up into five nutritious meals.

“They provided us with the recipe cards for the five meals, and our distribution and business development teams worked closely with our supply partners to deliver nearly 14,000 food boxes to 109 schools across Leicester. It was quite a challenge, but we have some fantastic people who pulled out all the stops to make it happen. We are passionate about our role within our local communities and I’m very pleased that we’ve been able to support such a great initiative.”

As well as receiving the food box, eligible families will be able to sign up for some free activities during half-term​ on a first-come, first-served basis, and they can also pick up a free activity pack from any of the eight Leicester libraries that are open for order and collect.

Anna Grant-Thomas, head of Taylor Road Primary School, said: “Learning how to cook a simple meal that’s tasty and healthy is a very important lesson, and I think our children will enjoy making these meals at home.

“Most of them are huge Leicester City fans, so I’m sure they’ll enjoy cooking along with their heroes and copying their good eating habits.

“For far too many families, school holidays are an extra strain on already stretched budgets, so initiatives like this one really do help ensure that all children get at least one proper meal a day.”

Deputy city mayor Cllr Sarah Russell, who leads the city council’s anti-poverty agenda, said: “It’s been a very tough year for everyone, but it’s been particularly difficult for families on low incomes. I’m therefore really pleased that we’re able to offer this half-term package of food and activities that will hopefully make life a little easier for many local families.

“Almost 14,000 children and young people in Leicester are eligible for free school meals and it’s vital that they don’t miss out on a meal when the schools are closed.

“I’d like to thank Leicester City Football Club and the team at Samworth Brothers for helping us to support thousands of young people and their families across the city with this important half-term initiative, the volunteers who helped deliver the boxes to local schools, and the organisations who are providing activities as part of the programme.”

The council has used £1m of its own resources to support the city’s most financially vulnerable people during the pandemic. Around £200,000 of this will be used to support the half-term food programme.

All schools in Leicester were invited to participate in the scheme, with 109 city schools signing up to be part of it. A total of 13,738 food boxes will be distributed.

Each box will include the ingredients needed to make the five meals featured in the recipe cards. These are: Lentil Curry, Chickpea Tray Bake, Quick Pizza, Tuna & Vegetable Frittata, and Tuna & Sweetcorn Pasta

More information about the scheme can be found at families.leicester.gov.uk/fsmhalftermoffer

Leicester City’s Jonny Evans rustles up tuna & sweetcorn pasta – one of the five nutritious recipes that feature in the half-term food programme.