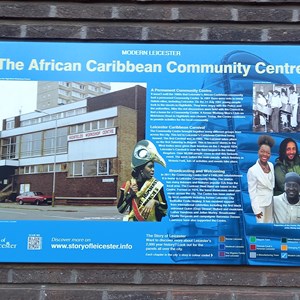 The panels are part of a series of more than 150 scattered on streets and in public locations across the city, documenting the people, places, buildings and events that make Leicester special.

Among the panels most recently installed is one outside Leicester’s African Caribbean Centre, on Maidstone Road in Highfields. It tells the story of the centre’s inception in the 1980s and the first Caribbean Carnival in Leicester in 1985, as well as recounting some of the famous visitors to the centre over the years.

Also in Highfields, the development of St Peters’ estate will be reflected by the Highfields Centre panel, which is due to be installed soon. The panel has an image of the HMT Windrush on it, and focuses on how the Highfields Centre provided a community space for the Windrush generation as well as allowing South Asian immigrants to develop numerous groups which went onto flourish throughout the city.

Nearby, a heritage panel at Spinney Hill Park tells the story of the Highfields neighbourhood’s historic diversity, from Jewish settlers around the time of the Second World War, to African Caribbean people in the 1950s, and new arrivals from India and East Africa in the 1960s and 70s.

Meanwhile a new panel marking the site of Bow Bridge House, near Leicester’s Bow Bridge, tells the tale of two local women who campaigned for the abolition of slavery in the early 19th century.

The elegant house – home to Elizabeth Heyrick, who set it up as a school – was demolished in the 1960s, but the story of its campaigning owner lives on. Together with her friend, Susannah Watts, Elizabeth went door-to-door in Leicester asking people to stop buying sugar from West Indian plantations. She also wrote a leaflet calling for the immediate abolition of slavery, which was distributed across England and America.

“All of our diverse communities contribute positively to life in this city and play a vital role in Leicester’s past, its present and - I am sure - its future too. It’s right that we celebrate and recognise these contributions through these new heritage panels.”

They are part of the city council’s Story of Leicester project, run by the museums service. The project celebrates the city’s 2,000-year history by remembering the people, places and events of Leicester’s recent and distant past.