Leicester Half Marathon to take to city’s streets once again 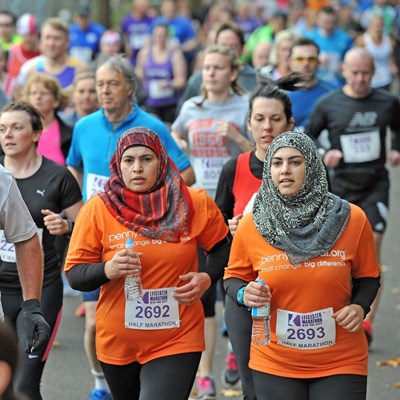 RUNNERS will be taking to the city’s streets this weekend with the return of the Leicester Half Marathon.

The hugely-popular event, which hasn’t taken place for the last two years, will be held on Sunday, October 31, starting and finishing at Leicester’s Victoria Park, and is expected to attract runners ranging from enthusiastic amateurs to club athletes.

It is being run to raise funds for a range of charities including Leicester’s Loros Hospice.

As in previous years, the event will mean a series of rolling road closures to allow the runners to pass safely through the city centre and beyond.

Runners will set off from Victoria Park at 9.15am, and will follow a route through the city centre, Belgrave, Thurmaston and into Birstall before returning to the starting point.

The rolling road closures will affect a route including London Road inbound, St George’s Way, Charles Street, Belgrave Gate and out of the city centre, through Melton Road and out towards Watermead Country Park and Birstall, before the race returns via Red Hill Circle and parts of Loughborough Road and Thurcaston Road, and then joins the riverside path.

From there the route will return to the city via Abbey Park Road, the city centre, Welford Road, De Montfort Street and University Road on its way to the finish at Victoria Park.

Race director Andrew Ward said: "We do our absolute best to make sure that all local residents are made aware of the event beforehand and would encourage everyone to come out and support what is such a fantastic event for the whole city.

“We can't wait to see everyone lining the streets again for this year's marathon. It's such a great atmosphere on the day and ultimately raises thousands of pounds for LOROS Hospice and other local charities."

Full details of roads affected can be found on the event's website at leicestermarathon.org.uk/road-closures

“It’s wonderful to see it back on the city’s streets after two years away. The nature of the event means we have to put temporary traffic restrictions in place to enable it to take place safely, so I’d advise drivers to consider using an alternative route during the race.”

Some bus services will also be affected, mainly along the route from Abbey Park towards the city centre, due to road closures.

All services which would normally leave the city centre via Savoy Street and Causeway Lane will instead use Abbey Street and Burleys Way, with inbound services using Belgrave Gate instead of Causeway Lane or Churchgate/Gravel Street.

Roads are expected to have reopened fully by 1pm.

People are being urged to enjoy the event safely by staying at home if they have Covid-19 symptoms; taking a lateral flow test before going to events; and wearing a face covering in crowded or confined spaces.

Regular handwashing or sanitising will help to reduce the spread of Covid-19 and flu. Vaccination is the best protection available against them.