Motorists reminded of traffic changes due to Diwali celebrations 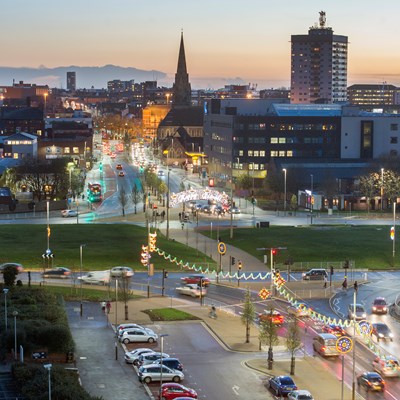 VISITORS to this weekend’s Diwali lights switch-on in Belgrave are being encouraged to walk, cycle or use public transport instead of driving to attend the world-famous festivities.

This Sunday (October 24) sees the switch-on of the city’s famous Diwali lights on the Golden Mile, and while last year’s events took place virtually due to Covid restrictions, this year’s celebrations will see people returning to the streets once more.

Festivities include giant screens on Belgrave Road near Belgrave Circle, Wand Street and Cossington Park showing a pre-recorded cultural programme recorded at Leicester’s Curve theatre. It will be shown three times throughout the day from 5.30pm, ahead of the pre-recorded countdown – displayed on all three screens – which heralds the switch-on of the lights at 6.30pm.

Several local road closures and other traffic restrictions will be in place to enable the festivities to take place safely, and visitors are being urged to make use of other forms of transport.

Belgrave Road will be partially closed between Belgrave Circle and Garfield Street from 2pm to enable the screens to be set up. The rest of Belgrave Road will still be accessible from the Melton Road / Loughborough Road end until 5pm, but vehicles entering and exiting the area can expect delays.

From 5pm until around 9.30pm, Belgrave Road and the junctions with its side roads will be fully closed to all traffic, with numerous local parking restrictions also in place throughout the day.

A special Diwali Park and Ride service will run from the Birstall Park and Ride site and Abbey Park Road to enable visitors to attend the event without having to find a parking space.

Limited car parking spaces for blue badge holders will be available on a first come first served basis at the B&M car park, just off Belgrave Circle. Visitors can also use public car parks at nearby Abbey Street, the Haymarket Centre, or Lee Circle.

There will also be temporary bicycle parking available on site.

Up to date information on public transport, walking and cycling routes is available at choosehowyoumove.co.uk

Deputy city mayor for culture, leisure and sport, Cllr Piara Singh Clair, said: “It is fantastic that Diwali celebrations can take place once again on the city’s streets.

“Putting on an event of this size on what is normally a busy route into the city obviously affects traffic, so I’d urge people wherever possible to consider leaving their cars at home and instead walking, cycling or using the Park and Ride services to come along.”

This year’s Diwali celebrations will see the usual firework display replaced with a beautiful Fire Garden, lighting up Cossington Street recreation ground with hundreds of real candles and a dramatic flaming centrepiece.

A trio of fire performers from Helter Skelter Arts will also be taking part, as well as two giant puppets representing the Hindu god Hanuman and the demon king Ravana, engaged in the battle between good and evil.

Cossington Street recreation ground will host a Diwali Village featuring food stalls and funfair rides from 3pm-9pm, while the spectacular Wheel of Light makes a welcome return to Belgrave Road – taking visitors for a spin from Friday, October 22, until Sunday, November 7.

Shops and restaurants along the Golden Mile will be taking part in a campaign to encourage visitors back to the area, including a competition with a chance to win £2,000-worth of prizes in the Diwali Big Shop campaign, supported by funding from the European Regional Development Fund (ERDF).

Leicester's Diwali celebrations are generously supported by the University of Leicester.

More information about Diwali in Leicester, and about the Diwali Big Shop competition, can be found here.