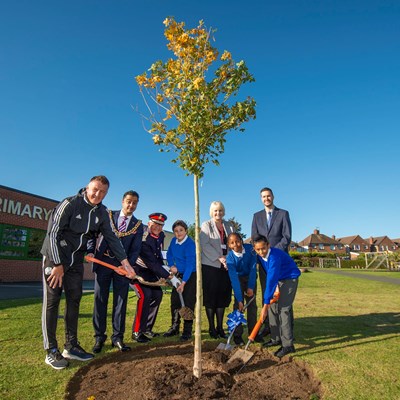 A MAPLE tree will be planted at a Leicester school this week as part of plans to mark the Queen’s Platinum Jubilee.

The Lord-Lieutenant of Leicestershire Michael Kapur OBE and the Lord Mayor of Leicester Cllr Deepak Bajaj will join children at Alderman Richard Hallam Primary School to plant the tree in the school grounds on Friday (15 October).

The maple tree will be planted as part of a project called The Queen’s Green Canopy – a nationwide campaign to encourage people to ‘plant a tree for the Jubilee’, which will be commemorated next year.

The Queen planted the first tree in the grounds of Windsor Castle in March to mark the launch of her Green Canopy project.

“Lieutenancy Offices around the country have gifted trees to 69 schools, with a 70th tree planted by HM The Queen at Windsor,” said the Lord-Lieutenant, Michael Kapur.

“I’m therefore delighted that we have been able to work with the children at Alderman Richard Hallam to mark Her Majesty’s Platinum Jubilee in this very special way.”

Ann-Marie Kedzior, headteacher at Alderman Richard Hallam Primary School, said: “It is an honour for our school to be selected to receive the tree as part of the Jubilee celebrations – and a great way to commemorate this significant anniversary for HM The Queen.”

Leicester’s Lord Mayor Cllr Deepak Bajaj said: “We are hugely honoured to play a special part in the Jubilee celebrations and to share this occasion with our young people in Leicester.

“This tree will be a lasting legacy, recognising Her Majesty The Queen’s devoted service to this country over the last 70 years.”

The city council will also be taking part in the Queen’s Green Canopy project, planting trees to commemorate the Platinum Jubilee during the current planting season. More details will be announced soon.