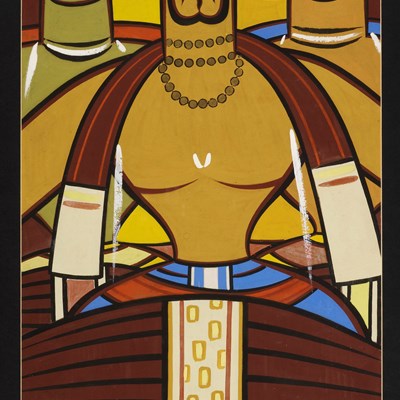 THE EMERGENCE of modern art in India at the end of the 19th century will be documented in a new exhibition at Leicester Museum & Art Gallery from Saturday (11 September).

Featuring more than 100 works, including important pieces loaned by the British Museum, the exhibition is one of the largest of its kind to be held outside of India.

Many works from private collections will be on public display for the first time, helping to guide visitors on a journey through Indian modernism from 1870 to 1950.

Exhibition co-curator Dr Caterina Corni said: “The British established art colleges in India in the mid-19th century, introducing a curriculum dominated by western academic art, but by the turn of the 20th century, Indian artists were beginning to rebel.

“The emergence of Indian modern art was a quest for cultural independence that occurred in parallel to the fight for political independence from colonial rule.”

Three of the most successful modern Indian artists to emerge from the Bengal School of Art in the 1920s rejected calls to rediscover centuries-old Indian art, and instead took inspiration from three sources: western academic art, Indian folk traditions and contemporary expressionism.

Deputy city mayor Cllr Piara Singh Clair said: “Painting Freedom will be one of the largest exhibitions on this defining period of modern Indian art to be shown in the UK.

“As the city gets ready to mark the festival of Diwali, I am delighted that we are able to host this major celebration of Indian art at Leicester Museum & Art Gallery.”

Admission to Painting Freedom is free of charge.