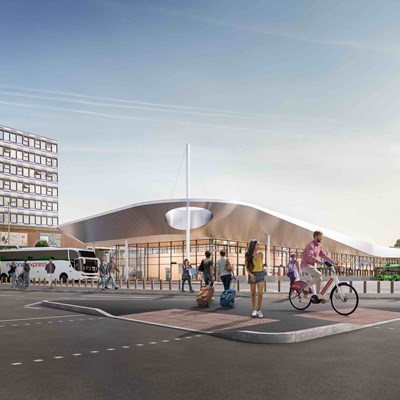 PART of Leicester’s busy inner ring road will be subject to overnight closures for up to ten days from next week for essential resurfacing works.

The resurfacing is the latest phase of highways improvement works to Burleys Way and Abbey Street junction as part of the major regeneration of St Margaret’s Bus Station and surrounding streets.

Leicester City Council is carrying out work to remodel the junction of Burleys Way and Abbey Street, and has closed the turn into Abbey Street from the inner ring road permanently.

As part of the improvement scheme, a new super crossing is being created across Burleys Way to replace the former footbridge, which was removed last year. The work will also create space for wider footpaths and a new cycle track.

The next stage of work will take place from Monday 4 October, and will see a series of overnight closures of Burleys Way for up to two weeks. This is so resurfacing work can be carried with the minimum of disruption to this busy route.

The road will be closed to all traffic from 7.30pm until 6am between its junctions with St Margaret’s Way and Belgrave Gate. This will include Burleys Flyover.

Noisy work will end by 11pm and signs advising motorists of the work will be in place. Diversions routes will be clearly signposted, using Abbey Park Road and St Margaret’s Way.

This is the first phase of highway works being carried out as part of the £13.5million St Margaret’s Gateway regeneration scheme.

Leicester City Council is building a striking new building to replace the old St Margaret’s bus station and creating more attractive routes for pedestrians and cyclists as part of major scheme to revamp this part of the city centre.

City Mayor Peter Soulsby said: “The St Margaret’s Gateway regeneration scheme is a major project for Leicester and will help revive this important part of the city.

“The new investment in the St Margaret’s area will provide a huge boost for public transport, help regenerate a run-down but well-used gateway into Leicester and help attract even more investment into the city.”

The £13.5milllion St Margaret’s Gateway regeneration project is supported by a £10.5million allocation from the Getting Building Fund, a pot of government funding awarded to the Leicester and Leicestershire Enterprise Partnership (LLEP) for shovel-ready infrastructure projects to create jobs and support economic recovery across the country.

A series of energy efficiency and renewable energy measures will help make the new bus station a net carbon zero building. The roof will be fitted with over 750sqm of photovoltaic panels which will generate enough energy to power the new bus station and feed surplus green energy back into the grid. The installation of the new building’s array of photovoltaic panels will be supported by a grant of £202,500 from the European Regional Development Fund (ERDF), as part of Leicester City Council’s successful bid for over £4million of match-funding to support a range of ambitious transport-related projects that aim to cut greenhouse gas emissions.

Leading construction and regeneration specialists Morgan Sindall Group PLC is the main contractor for the project.