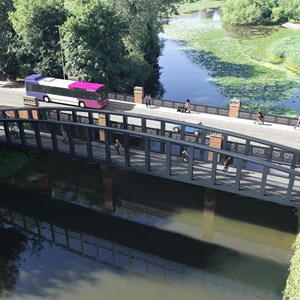 PLANS for a major revamp of Leicester’s Abbey Park Road – including a new bike-friendly footbridge across the River Soar and major junction improvements – have been announced by the city council.

The £7.5million scheme – which will also see new bus lanes introduced and footpaths improved to create a safer and more attractive route for pedestrians and cyclists – is supported by the Transforming Cities Fund as part of an ambitious programme of investment in sustainable transport across the city.

The striking centrepiece of the scheme will be a new 3.5metre wide footbridge which will run parallel to the existing road bridge across the River Soar, helping to ensure that there is enough space for all road users to use the busy route safely and efficiently.

Extensive maintenance work will also be carried out to the two existing road bridges which cross the river and canal.

New camera-enforced bus lanes running in both directions along the road will give more priority to public transport in a bid to improve journey times and encourage more people to use the bus.  Although general traffic will be reduced to one lane in either direction, the scheme has been carefully modelled and designed to ensure that traffic capacity will be maintained, avoiding delays and congestion.

Footpaths will be widened to provide safe space for pedestrians and cyclists and two new road crossings will be created.

A small area of car parking immediately in front of the main gates into Abbey Park will be removed, and the area revamped to create a more welcoming approach into the award-winning, historic park.

A new e-bike docking station will also be installed to the west of the River Soar as part of electric bike hire scheme launched earlier this year by the city council in partnership with Santander.

The council also intends to carry out road resurfacing as part of the planned scheme.

Alongside this, the city council is planning extensive improvements to Abbey Park Road’s busy junction with the A6 Abbey Lane and Blackbird Road, and also at the nearby junction with Exploration Drive.

Work will be carried out to remodel both junctions to give greater priority to buses and encourage more people to use public transport.

This will involve remodelling the existing splitter islands and major realigning of the junction. At the same time the existing traffic signals upgraded and pedestrian crossings improved.

Existing pedestrian crossings in the immediate area will also be upgraded.

Initial works on Abbey Park Road are due to begin in September 2021 and the scheme is expected to take up to 18 months to complete. Works  on the junction are due to begin in October and will take around six months. Extensive maintenance work on the existing road bridge is scheduled to start from spring 2022 and will require an extended road closure. More details will be publicised nearer the time.

Deputy City Mayor Cllr Adam Clarke, who leads on environment and transportation, said: “[DRAFT] It is vital that we continue to invest in encouraging more people to make the shift to cleaner, greener, healthier and more sustainable transport, not least because traffic is responsible for a quarter of our city’s carbon emissions.

“This ambitious proposal to revamp Abbey Park Road will help radically change the way that people think about travelling on this busy route. As it stands, the existing road bridge can be a daunting prospect for cyclists, and the introduction of a new footbridge will make this a much more appealing and safer route for all road users.

“Ensuring our bus services are reliable and have priority over general traffic on important routes is really important in encouraging more people onto buses. We know the introduction of new bus lanes on busy routes can have a major impact on bus patronage, with increases of up to 13 per cent.

“Along with the expansion of the citywide network of safe routes for pedestrians and cyclists, investment in public transport will be vital to meeting our commitment to help further improving the city’s air quality and helping Leicester in its response to the climate emergency.”

Leicester City Council is carrying out an ambitious £80million citywide programme of investment in sustainable transport, backed by £40million from the Department for Transport’s Transforming Cities Fund (TCF). The package of work will focus on major sustainable transport improvements to provide attractive choices for people to get to work, education, local and other facilities supporting the city’s growth and deliver on the council’s climate emergency, air quality and healthy living commitments.

Match funding for the programme is being provided through the city council, Leicester and Leicestershire Enterprise Partnership (LLEP) and other partners.

Schemes include the development of new bus priority corridors linking the city centre to city neighbourhoods and suburbs, and the continued development of a network of high-quality cycling and walking routes throughout the city building on the success of Connecting Leicester. It has recently seen the introduction of electric buses onto the Park and Ride Services and the launch of a new electric bike hire scheme in partnership with Santander.

To view the plans for Abbey Park Road and junction improvements in more detail, visit www.leicester.gov.uk/transformingcitiesfund

Over 1,000 letters have been delivered to residents and businesses in the area to inform them of the proposals. People will have until Friday 24 September to comment on the schemes.