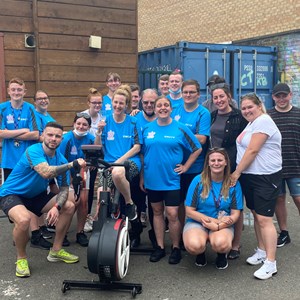 A YOUTH club in Eyres Monsell is seeking the public’s support for a project that aims to improve the health and wellbeing of people of all ages in the area.

The Eyres Monsell Club for Young People hopes that its crowdfunding appeal will raise the money needed to equip a community fitness and wellbeing hub at the rear of its premises on Whitteney Drive South in Leicester.

The youth club – which is also a registered charity – has already got Sport England’s support for the extension, but it now needs to raise £10,427 to furnish and equip the new space.

So far, pledges worth £5,425 have been made on the #MakeMonsellMove crowdfunding page – but the club needs to raise a further £5,002 by 18 November to ensure the project comes to fruition.

Louise Wylie, centre manager at the Eyres Monsell Club for Young People, said: “Make Monsell Move aims to provide adults and young people in Eyres Monsell with a community fitness & wellbeing hub that will support their mental health, as well as their physical health.

“Eyres Monsell is one of the most disadvantaged wards in Leicester, so any initiative that helps people look after their health and wellbeing will be welcomed by those who live in the area.

“Working with other agencies and professionals, we want to provide support to those who need it, as well as providing a reasonably-priced, well-equipped gym that local people of all ages can enjoy together.

“All donations – however small – will help us reach our target, so if any business or individual would like to support our appeal, we’d love to hear from them via our Spacehive website.”

Cllr Elaine Pantling and Cllr Karen Pickering, who represent Eyres Monsell ward, have already supported the project with a contribution of £4,000 from the city council’s ward community fund.

Cllr Pantling said: “What’s so good about this proposal is that it will provide these much needed new facilities in the heart of the community.

“It’s really important that we make it easy for people to look after themselves and having this, right on their doorstep, will be a real boost for the community.”

Cllr Pickering added: “The new hub will be much more than a gym – it will be a place where people of all ages can come together and forge friendships across generations.”

“The Eyres Monsell Club for Young People has already secured half the funds it needs to equip the new gym – now it just needs the community to rally round to help them over the finish line,” he said.

“I wish them the very best of luck in raising the final £5,000, and I would encourage local businesses, organisations and individuals to have a look at the charity’s page on the CrowdFund Leicester site and to support the appeal, if they can.”

Anyone wishing to contribute to the appeal can make their donation at spacehive.com/makemonsellmove by 18 November.

Cash donations can also be made in person at the Eyres Monsell Club for Young People on Whitteney Drive South, LE2 9AQ.

Since September 2017, the City Mayor’s community engagement fund has supported ideas through CrowdFund Leicester that bring communities together and improve Leicester for everyone.

More information is available on the City Mayor’s webpages at leicester.gov.uk