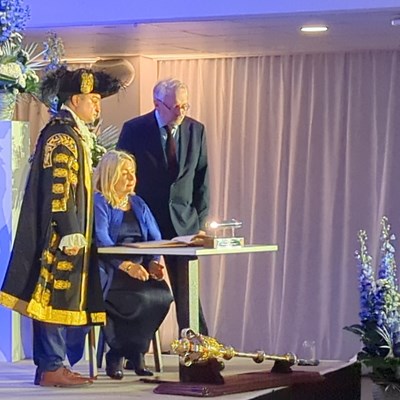 LEICESTER City Football Club today received the Honorary Freedom of the City at a ceremony at the King Power stadium (Monday 4 April).

The accolade is the highest civic honour the city council can bestow and recognises the contribution the club has made to the city of Leicester over the years.

At this morning’s ceremony, Lord Mayor Cllr Deepak Bajaj presented the club’s chief executive Susan Whelan with an illuminated Certificate of Admission, recognising the honour and distinction the club has brought to Leicester as a result of its sporting achievements and in appreciation of its commitment to local communities.

Club chairman Khun Aiyawatt Srivaddhanaprabha also received the first ever City of Leicester Award – a new civic honour that recognises the individuals whose outstanding achievements have had a positive and wide-reaching impact on the city, and who have been a source of inspiration to its residents.

City Mayor Sir Peter Soulsby said: “The Honorary Freedom of the City is the highest award our city can give, and it is entirely fitting that it be given to Leicester City for the honour and distinction it has brought to the city.

“The club’s against-the-odds Premier League title win was a chapter in sporting history that the whole city can be proud of, and its continued achievements have raised the profile of Leicester across the globe in a way that has helped the city find renewed pride in itself.

“Sporting achievements and trophies aside, the club has shown a continued commitment to sports development within our local communities, and it is an inspiration to its fans and to the people of Leicester.

“It is the personal contribution of the late Khun Vichai, and the commitment he showed to Leicester that continues under the leadership of his son, Khun Aiyawatt, that we want to acknowledge with our new City of Leicester awards.

Accepting the inaugural City of Leicester Award, Khun Aiyawatt said: “From the moment we arrived in Leicester 12 years ago, we felt the support of this city. Its people have been with us during the best of times and during the most difficult of times. It has forged a bond between us that can never be broken.

“My father believed in the people of Leicester. He gave his heart to them because he saw the strength of this city when its people came together and how we could all help each other. It makes me so proud, that we continue to come together to fulfil that vision in his name.

“I will, with all my strength, continue to do my best for Leicester and its people, to remain deserving of this prestigious award that has been given to me and my late father.”

City councillors voted unanimously to award the Honorary Freedom of the City to the football club at a meeting of the full council on 23 February.

Lord Mayor of Leicester Councillor Deepak Bajaj said: “I am immensely proud to confer the Freedom of the City to Leicester City Football Club after their amazing sporting successes, which have been so well received not only here in Leicester, but across the world.

“Much of their success is as a result of the dedication and commitment made by both their former and current chairman and I am honoured to recognise their achievements with the newly created City of Leicester Award.”

Previous recipients of the Honorary Freedom of the City of Leicester include:

The conferment ceremony took place after a statue of Khun Vichai was unveiled at a private event. Fans will be able to see the statue from tomorrow (Tuesday).

Khun Vichai became Chairman of the club in 2010, following its takeover by a Thai-led consortium which he led. He made significant investments in the club which saw them return to the Premier League in 2013/14 as the Championship title winners. The club then went on to achieve its historic Premier League title win in 2015/16, despite pre-season odds of 5,000/1.

During his time as chairman, Khun Vichai invested in both the club and the local community, personally donating more than £4 million to different causes. Tragically, on Saturday 27 October 2018, he died in a helicopter accident, alongside four others, outside the King Power Stadium.

The Foxes Foundation, formed in 2011/12 was renamed The Vichai Srivaddhanaprabha Foundation in Khun Vichai’s honour, and it continues to provide significant support for local charities.

His son Khun Aiyawatt, vowed to continue his father’s legacy, and in May 2021, the club had its first FA Cup success.  This means LCFC has now won every major honour in English football – the Premier League, the FA Cup and the League Cup. Another win followed when the FA Community Shield was secured in August 2021.

The club has also enjoyed success with the women’s team, which won the Women's Championship in April 2021, sealing promotion to the FA Women's Super League in the process.

Alongside the work of the foundation, the club makes an invaluable contribution to the city through the Leicester City Football Club Community Trust, where it uses football to inspire individuals to reach their full potential.