Latest heritage information panels take their places in the city 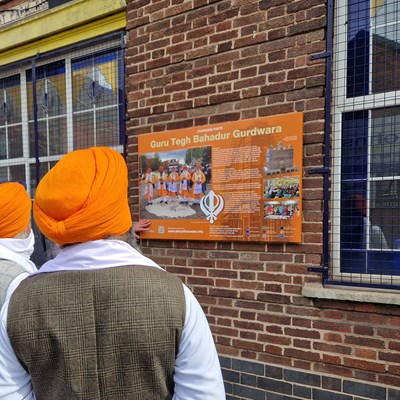 A SERIES of 10 new heritage panels have been installed to tell the stories behind key historic and cultural sites across the city.

The colourful information panels have been installed to give residents and visitors to the city the chance to find out more about Leicester’s extensive history from Roman times, through the Middle Ages, to the manufacturing, engineering and transport of the Victorian era and beyond.

The panels are all part of the city council’s Story of Leicester project, which brings to life the city’s colourful 2,000-year history by remembering the people, places and events of Leicester’s recent and distant past.

The latest additions include three panels which are related to the architect and former Lord Mayor Arthur Wakerley, and are located around Gwendolen Road in Evington.

They include information on the Wakerley Centre – the former Wycliffe Centre of the Blind – which shows the development of Leicester, Leicestershire and Rutland Incorporated Institution for the Blind and the growth of services for blind people.

Wakerley House, in Gwendolen Road, showcases the house which Arthur Wakerley built for himself, along with the adjoining house for his daughter Gwendolen, after whom the road itself is named.

Wycliffe Hall, which was designed by Arthur Wakerley for the Royal Leicestershire, Rutland and Wycliffe Society for the Blind, is also featured.

In Westcotes, a panel on Hinckley Road depicts a large manor house where Westcotes derives its name, as well as providing details of Bow Bridge, a hospital and a number of churches, some of which no longer exist.

The history of Bede Island is told on a panel in Western Boulevard, telling how the island on the Leicester Navigation Canal route became a hub of industry with the development of Swan Lake Mills and several scrap yard businesses.

Haymarket Theatre, which once housed the largest theatre stage in the country, features on a panel which tells its history and connection with local talent such as Parminder Kaur Nagra and Rakhee Thakrar, who went on to wider international acclaim.

A panel in New Street in Leicester’s Old Town highlights the popularity and architectural detailing of the old Turkish baths at Friar Lane and New Street.

Guru Tegh Bahadur Gurdwara, in East Park Road, has a panel highlighting the importance of the Sikh place of worship to the community, while at the Shri Swaminaryan Mandir in Catherine Street, a panel will showcase the architectural details of the Hindu place of worship.

At the site of the former Filbert Street football ground, in Raw Dykes Road, a panel will tell the story of the development of the stadium and the success of Leicester City Football Club.

So far 175 heritage panels have been installed throughout the city since 2014 as part of the Story of Leicester work project.

Leicester deputy city mayor for culture, leisure and sport, Cllr Piara Singh Clair, said: “These latest heritage panels are part of an extensive network across the city which bring to life the stories of some of Leicester’s most fascinating places and people.

“Some of the locations are better known than others, but all have a history worth telling through these easy to read, colourful and informative Story of Leicester heritage panels.”