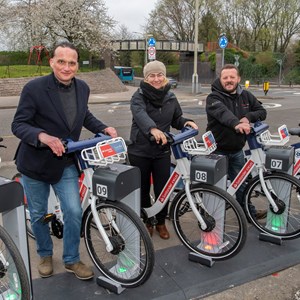 A MAJOR expansion of Leicester’s e-bike share scheme is getting under way, with 30 new bike docks and 330 additional cycles being added to the fleet.

Santander Cycles Leicester offers anyone visiting, living or working in the city the opportunity to get around by e-bike. Over the coming weeks, new docking stations will be added at key neighbourhood locations in Braunstone, Saffron Lane, Spinney Hills and Belgrave. There will also be new docks at all three of Leicester’s hospitals, at the University of Leicester and at Space Park Leicester, close to the National Space Centre.

Since the lifting of lockdown restrictions in April last year, the e-bike share scheme has already been used by more than 19,000 people, with almost 47,500 trips made on the electric bikes.

To use the scheme, you register online, buy a plan based on your needs and then use your smartphone to unlock an e-bike and start riding. Pay as you go, monthly and annual memberships are all available.

Deputy city mayor for environment and transport, Cllr Adam Clarke said: “It’s fantastic that more than 19,000 people have tried out our e-bikes. It reinforces for us that Leicester is a cycling city, with easy bike journeys possible from the outskirts to the city centre in little more than half an hour.

“People have told us they are keen to see the scheme expand out into our neighbourhoods, with more options available for picking up and dropping off the bikes, so that’s exactly what we are doing.

“This expansion will mean we’ll have more than 50 docking stations available, with 500 e-bikes in use.  It will make Santander Cycles Leicester the largest docked e-bike hire scheme in the UK.”

Santander Cycles Leicester is a £600,000 project funded by Leicester City Council through the Transforming Cities Fund, following the council’s successful bid to the Department for Transport.  It is sponsored by Santander UK, with investment from operator Ride On and their delivery partner Enzen Global.

Dan Sherwood, Director of Marketing at Santander UK, said: “It’s great to see the growing support for the Santander Cycles Leicester e-bike scheme, not just by residents but also by so many businesses and organisations within the city.  The expansion of the scheme will provide many more opportunities for people to use the cycles, at a time when our travel choices have become a critical part of our efforts to reduce emissions and improve our environment.”

Miguel Vital, CEO of Ride On, which operates the scheme on behalf of the city council, said: “Since we launched the e-bike share scheme last year, we've been helping to make cycling the most convenient solution for residents and visitors to get around Leicester. The deployment of all these new stations in key areas is a step forward to keep connecting all neighbourhoods and helps to create a more sustainable city. The more connected is our network is, the easier it is for people to choose to travel by bike instead of by car.”

Cllr Clarke added: “We’re facing a climate emergency and we have ambitious targets to meet to make our city carbon-neutral. That means we all need to think differently about how we travel. Investing in cycling schemes like this one – as well as the infrastructure that makes people feel safe to cycle – means we can reduce the city carbon’s emissions. It’s part of a travel solution for Leicester that prioritises ease and affordability for people, while cutting congestion and pollution, improving air quality and improving our own health and well-being.”

The Transforming Cities Fund is a major £80million city-wide programme of investment in sustainable transport, backed by £40million of Government cash from the Department for Transport. This ambitious package of works focuses on major sustainable transport improvements to provide attractive choices for people to get to work, education, shops and other local facilities to help support the city’s growth and deliver on the council’s climate emergency, air quality and healthy living commitments.

The programme includes the development of new bus priority corridors linking the city centre to local neighbourhoods and suburbs along with the continued development of a network of high-quality cycling and walking routes throughout the city, building on the success of the Connecting Leicester programme. As well as the Santander Cycles Leicester e-bike share scheme, it has also seen the introduction of electric buses onto Park and Ride services.

To find out more and to sign up to Santander Cycles Leicester, visit www.rideonleicester.com.