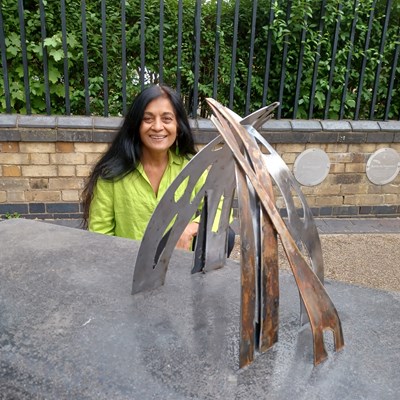 THE winning submission for a new piece of public art commemorating the 50th anniversary of the arrival of Ugandan Asians in Leicester has been revealed.

Entitled Sculptural Gateway, the piece is the work of Midlands-based artist Anuradha Patel. In her submission, Ms Patel says the two aspects of the Structural Gateway represent the two communities impacted by the expulsion of Asians from Uganda in 1972. The structure is connected at the top, symbolising the transition of a generation of people from one country to another.

It will be constructed using a variety of sharp angled, vertical structures which she says are a reference to pain and upheaval, while the overall softer architectural shape of the structure suggests a place of shelter, sanctuary and refuge.

The new piece of public art will be created and installed at Belgrave Circle, at the gateway to the city’s Golden Mile – as part of a wide-ranging programme of “Uganda 50” commemorations.

It’s intended that the artist will work with the local community to further develop her design over the coming months, giving them an opportunity to shape the final piece.

Anuradha Patel said: “I am delighted to be awarded the Ugandan Asian 50th Anniversary public art commission. It is of great significance to me as an artist and an exceptional opportunity to acknowledge, celebrate, and commemorate an event which has not only shaped my life, but the lives of a whole generation of people in the UK over the past 50 years.

“As a Ugandan Asian, of Gujarati origins, I feel strongly connected to the Asian communities in Leicester with so many shared experiences of migration, displacement, resettlement and assimilation in a new country.

“This commission will provide the platform to address, inform and celebrate the breadth of emotions and achievements of the Ugandan Asian community in Leicester.

“I am thrilled to have this unique opportunity to work in collaboration with the local communities and to help create an artistic vision which will provide a lasting legacy for future generations.”

Funding for the artwork will come from a combination of a planned CrowdFund Leicester campaign and a contribution from the city council.

Leicester deputy city mayor for culture, leisure and sport, Cllr Piara Singh Clair, added: “I am delighted to announce that Anuradha’s design will be taken forward to share with the local community, who will have the chance to help to create this new piece of public art which is linked to such an important part of Leicester’s recent past.”

Local people will have the opportunity to meet Anuradha and discuss their recollections with her at two events organised by the BNCHA this month.

A summer fun event will take place on Sunday 21 August, from 11am to 4pm, and a meet the artist event will run from 12pm to 4pm on Monday 22 August. Both events take place at the Canterbury House car park marquee, at 63A Melton Rd.

The artwork is part of a series of events and activities taking place in Leicester in 2022 to commemorate the landmark anniversary.

Leicester Museum and Art Gallery is hosting a Uganda 50 exhibition – Rebuilding Lives - in conjunction with community arts group Navrang, as the centrepiece of commemorations.

The project brings to life the extraordinary experiences of an entire community of people who were given just 90 days to leave Uganda, and the stories of those displaced people who settled in the UK, and in Leicester.

The exhibition in Leicester has also received a £10,000 contribution from Leicester City Council’s Museums and Galleries Services. It is open until October.

Curve Theatre is also staging a community production this summer looking at the Ugandan Asians’ exodus, their journeys to Leicester and contributions to the city over the last five decades.

The production – entitled Finding Home – Leicester’s Ugandan Asian Story at 50 – is running until August 6 and features three new, short plays by local writers whose families arrived in the UK from Uganda.

Photo caption: Artist Anuradha Patel with a model of her winning submission, ‘Structural Gateway’. The final design will be developed with the help of the local Ugandan Asian community.