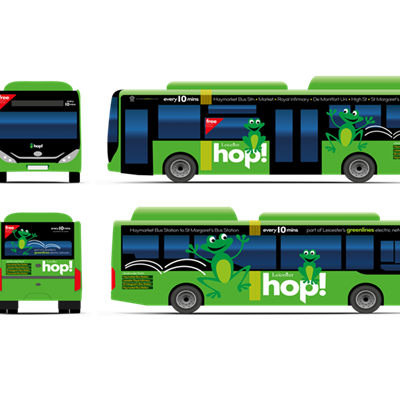 The new Greenlines ‘Hop!’ service will see state-of-the-art electric buses operating in the city centre, offering free travel on a route connecting Leicester’s transport hubs with many of the city’s attractions and other key destinations.

It is due to come into service in March 2023, and more details will be finalised over the coming months, including appointing an operator and agreeing the exact route and timetable.

The proposals are outlined in a report going to Leicester City Council’s Economic Development, Transport and Climate Emergency Scrutiny Commission on August 31, along with an update on the progress with the Leicester Buses Partnership, which was launched in April 2022 to bring together all the local bus operators and Leicester City Council, to work jointly on addressing both the city’s transport needs and its environmental responsibilities.

The Hop! service forms part of the integrated Greenlines electric network, which currently includes the Hospital Hopper service and the Birstall, Meynell’s Gorse and Enderby Park and Ride services which terminate at St Nicholas Circle. It follows a successful bid for funding from the national Transforming Cities Fund (TCF).

By purchasing a fleet of fully electric buses to serve the Greenlines network, public transport is contributing towards delivering a net-zero carbon city,  alongside many other actions including the new St Margaret’s Bus Station, the UK’s first net-zero bus station, which opened earlier this summer.

Electric buses will come into service on the Orbital route in November 2022, as the latest addition to the Greenlines electric network.

A further 90 electric buses will be introduced on many other services operated by Arriva and Firstbus during 2023, thanks to a council-funding bid and operator investment.

Leicester deputy city mayor with responsibility for transport, clean air and climate emergency, Cllr Adam Clarke, said: “The Leicester Buses Partnership has set out a detailed eight-year plan to significantly improve public transport in and around the city – something that is needed to reduce congestion, fight the climate emergency and better connect people to home, work and leisure.

“The new city centre Hop! service promises to provide people with an easily accessible, free transport option connecting sites around the city, meaning people can easily get to places like the bus stations, the market, LRI and St Nicholas Circle and make onward journeys from these places.

“We’re proud of our city centre and want those who might struggle to access it, including older residents and people with mobility problems, to be able to enjoy all it has to offer, sustainably. The new Hop! will also be an attractive service for people visiting our city on business or as tourists.

“There’s even more to follow as new electric buses are being introduced as part of the orbital route – 90 new electric buses are due to be introduced in 2023, helping us to intervene in the commercial bus network and to plug gaps in it with buses we own. This is all part of our work to make the city much easier to travel around without the need to use a car, especially for shorter journeys.”

Other key improvements brought in as part of the Leicester Buses Partnership include the “Tap On Tap Off” digital fare system – the first outside of London – which automatically enables passengers to get the best fare for the journey they have made, even if they’ve used more than one operator.

Commitments due to be delivered over the next 18 months include:

Significant investment in express cross-city routes by 2025, to enable people to get to workplaces in more outlying areas

More details of the Hop! service are available at the Leicester Buses website.