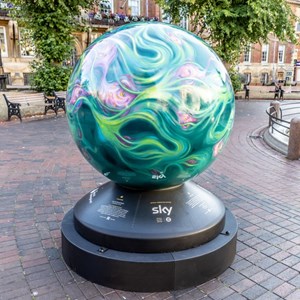 A NATIONAL art education project that aims to transform understanding of the transatlantic slave trade will launch in Leicester this week.

The World Reimagined will bring a trail of 10 stunning globe sculptures to the city’s streets from tomorrow (Friday 5 August), each designed by a new or globally-recognised artist.

With themes such as ‘Mother Africa’ and ‘The Reality of Being Enslaved’, the fibreglass globes will be installed at locations including Leicester train station, the Clock Tower, the Highfields Centre and Victoria Park, where they’ll help to highlight the reality and impact of the transatlantic slave trade in enslaved Africans.

Local schools have got involved in the project too, either by taking part in a poetry programme or by making their own mini globes that will go on display at a number of city centre venues from tomorrow (Friday 5 August).

Deputy city mayor Cllr Piara Singh Clair said: “These impressive globe sculptures will not only provoke debate and help improve our understanding of the impact of the slave trade, but they will also bring a spectacular splash of colour and new interest to the streets of Leicester this summer.

“This is a good opportunity for our city to be part of a national art and educational project and we look forward to welcoming The World Reimagined to the city’s streets.”

Assistant city mayor Cllr Sue Hunter, who leads on work to tackle racism and disadvantage, said: “This national project will help improve our understanding of a dark period of history that is perhaps not talked about enough – and by learning about the mistakes of the past, we can ensure they aren’t repeated in the future.

“Today, Leicester’s diversity is its strength and I hope that this stunning trail of artworks will inspire us to come together and imagine a future where everyone is treated with dignity – and where equality, diversity and racial justice are universally cherished.”

One of the artists taking part in the project is Leicester-based Jarvis Brookfield.

Jarvis – who had never painted on a 3-dimensional canvas before – relished the opportunity to work on a spherical shape.

“The sphere has so many connotations – evoking the earth, unity, love and life – that I loved the challenge of working with a globe for the first time,” he said.

“But as someone who is bi-racial, this project gave me an opportunity to be part of a collective effort to turn the atrocities inflicted by our extended family on our ancestors into something beautiful.

“Despite the tremendous difficulties experienced by our ancestors throughout history, the human spirit continues to persevere and to rise above adversity – and that’s what I wanted to communicate through my design.

“I hope my work will offer people an opportunity to reflect on the things that unite us, as opposed to what divides us, and I hope that all 10 globes will serve as a source of inspiration and learning for all the people who will be interacting with these works on the streets of Leicester.”

Full details of Leicester’s artists and artworks are as follows:

Lou Boyce: Stolen Legacy: The Rebirth of a Nation – outside Medway School

Zita Holbourne: Echoes in the Present – The Clock Tower

A QR code at each site links to a map showing the locations of all 10 globes.

Globes designed by children at Leicester schools will be on display at Curve, Highcross, Beta X and the LCB Depot from tomorrow (Friday 5 August) too.

The World Reimagined will take place in Leicester from 5 August – 31 October 2022.

It will also bring art trails to Birmingham, Bristol, Leeds, Liverpool City Region, London and Swansea this summer – with a total of 250+ schools and colleges taking part, and 2m+ visitors expected to engage with the trails.

More information about The World Reimagined is available at www.theworldreimagined.org

Picture caption: 'From Roots to Fruit' by Leicester-based artist Jarvis Brookfield is on display in Leicester’s Town Hall Square until 31 October.