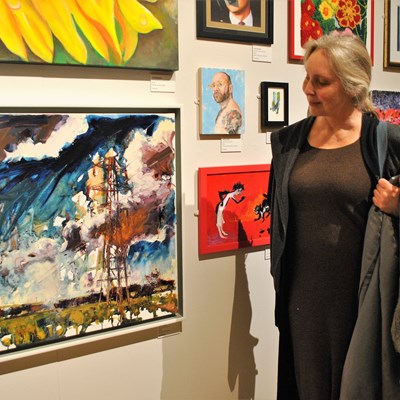 THE WINNING artworks in this year’s Open 33 exhibition at Leicester’s flagship museum have been announced.

Taking the top prize at Open 33 – which showcases artistic talent from across the East Midlands – was a painting by Nottinghamshire-based artist Susan Isaac.

The selecting judges praised the painting’s dynamic movement and the combination of energy and precision demonstrated by the artist.

Winners of the young people and children’s categories were Evian Baum (age 17) for A Breather, acrylic on canvas; Juliette Welisane Mayega (age 14) for Schizophrenia Was Their Name, mixed media drawing; and Samuel Eldredge-Allen (age 7) for As Flat as a Pancake, digital drawing.

The City of Leicester Museums Trust selected Claire Jackson’s Cat in My Garden, oil on canvas; Study in Blue, acrylic on canvas by Wilf Birch (17); Woman, Life, Freedom, acrylic and ink by Shaghayegh Behroozi (13); The Water of Life, paint on MDF board by Akemi Uchiha (6).

The other prize sponsors and winners were:

Open 33 – which is now open at Leicester Museum & Art Gallery – features works by local people that were selected by a panel of independent judges from more than 800 entries.

All the paintings, sculptures, textiles, prints and photographs on display have been created by artists aged 19 and over who live or study in Leicester, Leicestershire, Rutland, Derbyshire, Lincolnshire, Nottinghamshire or Northamptonshire.

Work by young artists aged five to 18 is also on display.

Cllr Piara Singh Clair, deputy city mayor for culture, leisure and sport, said: “The annual open exhibition attracts a huge amount of interest from all kinds of artists and I’d like to congratulate everyone whose talent has been recognised with a prize.

“Now in its 33rd, year, Open 33 provides a platform for emerging and established artists to showcase their work in the fabulous surroundings of the Leicester Museum & Art Gallery, and it’s a great way to celebrate the rich artistic diversity of the region.”

All the artworks on display are available to buy, with prices starting at £50, and purchased pieces can be collected from the museum after Sunday 22 January.

Supporting the exhibition is a series of free workshops, with a family-friendly event called ‘Make it! Do it!’ taking place at 11.30am and 2.30pm on 7 January and 14 January.