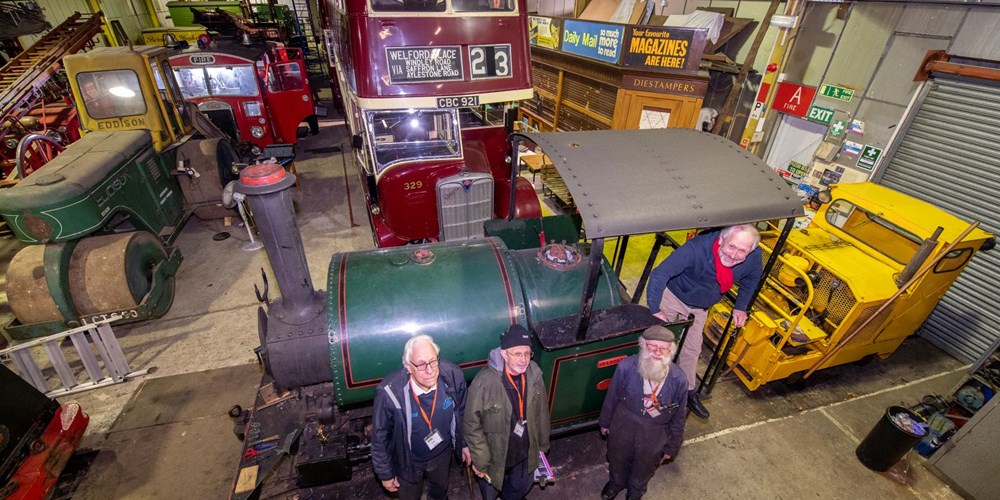 THE VOLUNTEERS who help to keep the vintage engines running at Leicester’s Abbey Pumping Station have been thanked by City Mayor Peter Soulsby.

Around 30 enthusiasts, who ensure that the pumping station’s giant beam engines run smoothly, operate the popular narrow gauge railway, and maintain the museum’s collection of vintage vehicles, showed the City Mayor the projects they’re working on during his visit to the site on Monday (28 November).

Their current tasks include the regular maintenance of an Aveling & Porter steamroller dating from 1893 - and a project to restore and repaint an electric bread delivery van that would have been a familiar sight in Leicester in the 1950s.

The Frears & Blacks’ bread van will eventually join the other vintage vehicles in the pumping station’s transport shed, once the volunteers have carefully restored it to its former glory.

“Our volunteers from the Leicester Museum of Technology Association are the lifeblood of the Abbey Pumping Station,” said City Mayor Peter Soulsby.

“We simply could not provide the range of interactive experiences available at the pumping station, without their engineering expertise and their enthusiasm for the items in the collection.

“Not only do they restore, repair and maintain the many vintage engines on site, but they also organise events, drive the narrow gauge railway, and run guided tours so that they can share their extraordinary knowledge with our visitors.

“I’m very grateful to them for giving up their time and doing so much for our museums service: their hard work helps ensure that the pumping station continues to be one of Leicester’s most popular attractions.”

Every Monday, between 30 and 40 members of the Leicester Museum of Technology Association give up their time to work on the engines and the other items in the collection, with some volunteers doing extra hours during the week too.

Tony Kendall, the chair of the Leicester Museum of Technology Association, said: “For many of us, volunteering at the pumping station is a chance to put our skills to good use, while doing something we enjoy.

“It’s great to get an old engine working again, or to restore something to its former glory, so there’s huge satisfaction, both mentally and physically, in working on these projects.

“We also enjoy putting on events for the public, where people can learn about the history of the pumping station and the stories behind the vintage vehicles in the collection.

“At this time of year, however, when the pumping station is closed to the public, it’s all about catching up on the essential maintenance of the gallery exhibits that’s more difficult to do when visitors are around.

“We always welcome anyone who wants to volunteer, whether that’s helping on the engineering side or serving tea and coffee on event days. Just drop in to the pumping station on a Monday, between 11am and 9pm, and we’ll be happy to see you.”

The Leicester Museum of Technology Association has been based at the Abbey Pumping Station since 1973 and will celebrate its 50th anniversary next year with some special events.

The pumping station is closed to the public during the winter months, reopening only for occasional special events. From February until October, normal opening hours are 11am-4.30pm every day.