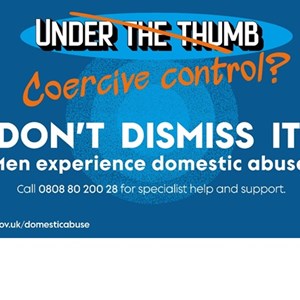 MALE victims of domestic abuse are being reminded that help is available for them through a new, high-profile awareness campaign.

Posters are being put up at Leicester railway station and locations including gyms, sports centres and barber’s shops to remind men who may be suffering from domestic abuse that they’re not alone and it’s not acceptable. A social media campaign has also been launched, using the hashtag #DontDimissIt.

The posters focus on two of the barriers men can face in getting help for domestic abuse. Being ‘under the thumb’ is sometimes used disparagingly to suggest weakness; as something to be laughed at, but the campaign asks people to consider whether someone ‘under the thumb’ is really experiencing coercive control, which is serious.

Another poster explains that domestic abuse is something that any man might experience and highlights some of the threats that can be used to silence men from reporting. For example, men of all ages and from all communities can have their sexual orientation used against them by their abuser(s). For men who have sex with men, those who are abusing them might threaten to ‘out’ them, which might lead to further isolation and abuse.  They might be abused by family specifically because of their sexual orientation.

The aim of the campaign is to help people to see that there is somewhere to turn to.

Deputy city mayor Cllr Sarah Russell, who leads on social care and anti-poverty, said: “We are targeting male victims of domestic abuse because we know one of the biggest barriers men might face is thinking that the domestic abuse services we have are for women only or that they will be dismissed.

“We need men who experience domestic abuse to know that there are specialist services available for them, whether they want to seek help locally or through a national service.

“This campaign is designed to reach men in the places they go to. If you, or someone you know, is being hurt in a relationship, it’s not OK – don’t dismiss it.”

An associated campaign already running locally reminds friends, colleagues and family members that they can also play a part in tackling domestic abuse. Called ‘When is it time to ask?’ it explains how you can help report something if you suspect domestic abuse.

A variety of specialist help and support is available in Leicester. Search ‘domestic abuse’ on the council website or phone the confidential domestic abuse helpline on 0808 80 200 28.