Women invited to sign up for free building skills sessions 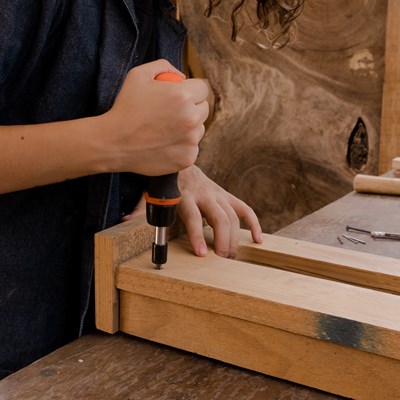 GIRLS and women who are interested in a career in carpentry, plumbing, tiling or painting & decorating can take part in free taster sessions this half-term.

Starting on Monday 14 February and running daily until Friday 18 February, the Women in Construction half-day sessions run from 9am-12 noon, or from 1pm-4pm.

Places on the workshops are filling up fast, so girls and women aged 16 and over are urged to sign up as soon as they can to make sure they get a place on a session that suits them.

The free Women in Construction taster sessions are run by the city council in partnership with Leicester College, with the council’s own qualified female trades operatives running the classes.

Those who enjoy the sessions and would like to embark on a career in construction will be able to apply for the city council’s craft trade apprenticeship scheme, when it’s advertised at the end of the month.

Maria Pancholi, operational development team leader from the city council’s Women in Construction team said: “This is a chance for women to try something they may never have tried before in a supportive environment.

“They will be taught by women already employed within the council’s housing team who can be looked upon as a shining example of what can be achieved with drive and determination.

“These taster sessions could be the start of a whole new career, with the opportunity to gain a qualification as a tradesperson with the council’s housing services.”

Cllr Elly Cutkelvin, assistant city mayor responsible for housing, said: “We’ve been running these sessions for many years, and they’re a really good stepping stone for women who may not have thought about applying for a craft apprenticeship before. But because of the pandemic, we haven’t been able to run them for the last two years – and that’s led to a drop in enquiries from women about our apprenticeships.

“I hope that this year’s programme will get us back on track, and encourage more women to find out more about a craft trade apprenticeship – and help us recruit a workforce that reflects the community we live in.”

More information and an online registration form is available at www.leicester.gov.uk/womeninconstruction

Applications for the city council’s craft trade apprenticeship scheme – which covers plastering, carpentry, painting and decorating, bricklaying and plumbing – are due to open at the end of the month.

Five out of the city council's 26 current craft trade apprentices are women, while 30 out of a total of 184 trade operatives at the council are women.