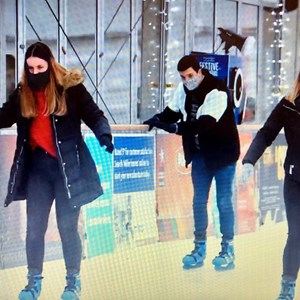 LEICESTER’S standout Christmas attraction has been packed away after providing festive fun to a record number of visitors.

Proving popular with younger people were the late-night sessions with DJs on Fridays and Saturdays – while families with young children enjoyed the sessions hosted by a giant friendly Snowman. Online sales also saw a surge, with more than 60% of all ice rink tickets being sold via the Christmas in Leicester website this year, compared to around 40% in 2019.

City Mayor Peter Soulsby said: “It’s the fourth time in the last five years that we’ve brought a real ice rink to Leicester for Christmas, but people’s enthusiasm for the attraction doesn’t seem to be waning.

“We kept prices at 2019 levels and offered group discounts to encourage people to make repeat visits, but the numbers we saw this year still took us by surprise – particularly as the ice rink’s capacity was reduced in light of the pandemic.

“Maybe people wanted to experience all the things they weren’t able to do last Christmas and wanted to make sure they had fun with their families and friends this year – and it’s also possible that Leicester attracted visitors from further afield, from areas where Christmas events had been scaled down.

“The result proved to be a bumper year for the ice rink – and I’m pleased to say that it will be back in Jubilee Square, as part of our Christmas programme, in December.”

Also proving popular was the city’s council’s Christmas grotto in Green Dragon Square, where the chance to meet Santa attracted more than 5,000 youngsters.

In the 10 days from 4-23 December, Santa welcomed 5,351 visitors to his snow-topped chalet behind the Corn Exchange, with everyone leaving with a free gift.

People also flocked to Leicester's two big wheels this Christmas: the colourful Happy Wheel, which was in place for the switch-on of the Christmas lights, and the traditional Wheel of Light attracted a total of 18,000 visitors, with the operator reporting his busiest ever Christmas in Leicester.

A review of Leicester’s 2021 Christmas events will be presented to members of the city council’s Heritage, Culture, Leisure and Tourism Scrutiny Commission on Thursday 20 January.

The city council’s lighting team has already started the massive task of carefully removing the decorations that have lit up the city since November. All the decorations are due to be safely back in storage by the end of January.

Christmas in Leicester 2021 was generously supported by Octopus Energy, Goldsmiths, CityFibre and Gem.