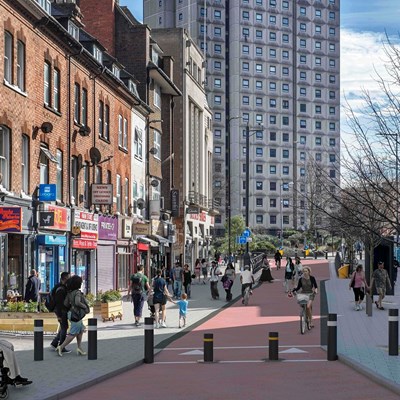 A BUSY shopping street and main gateway between Leicester city centre and the railway station is set for a revamp, with work due to begin later this week.

Leicester City Council will begin work to pedestrianise and improve a stretch of Granby Street between its junctions with Northampton Street and the inner ring road at St George’s Way.

The aim is to create a more welcoming gateway into the city centre and help make the busy route safer and more attractive for pedestrians and cyclists.

The pedestrianised area will be reconstructed to create a level surface, finished in red asphalt and a continuation of the existing high-quality block paving. Automated bollards will be installed at the entry and exit points and changes will be made to the existing contraflow cycle lane between Dover Street and the inner ring road to improve the route for cyclists.

Improvements are also planned for Northampton Street, where the existing footpaths will be widened and two new loading bays created,

New tree planting and cycle parking are also planned, and the installation of a new docking station as part of the city’s Santander Cycles Leicester e-bike hire scheme.

An earlier proposal to close the Dover Street junction with Granby Street will be amended following feedback from consultation carried out in spring 2021.

Deputy city mayor Cllr Adam Clarke, who leads on environment and transportation, said: “This part of Granby Street is a major gateway into the city centre for people arriving in Leicester by train and is a busy shopping street in its own right. It links directly to the super crossing on St George’s Way and is an important route for anyone walking or cycling into the city centre.

“These improvements will make the route more welcoming and safer for pedestrians and cyclists, while having minimal impact on motorists. It’s over a decade since the underpass that ran beneath the ring road was removed and now is a good time to revisit the area and improve it further.”

Work is due to get underway from Monday 10 January and will take around seven months to complete.

The scheme will cost around £900,000 and will be supported through the Getting Building Fund, a pot of government funding awarded to the Leicester and Leicestershire Enterprise Partnership (LLEP) for shovel-ready infrastructure projects to create jobs and support economic recovery.

Kevin Harris is chair of the LLEP Board of Directors. He said: “Granby Street is an important gateway to Leicester city centre and often the first port of call for visitors to our city. These improvements will help prioritise visitors that make the journey via public transport and help us meet our ambitious targets for sustainable transport and carbon reduction.

“These improvements to Leicester’s public realm will result in a better quality of life for Leicester’s residents, increased economic opportunity for local businesses and better links to the St George’s and Cultural Quarter areas, which are vibrant parts of the city centre and key to the local economy.”

Granby Street also forms part of the new High Street Heritage Action Zone. The scheme will offer grant funding to support heritage-led improvements and repairs to historic properties in the area and help bring commercial units back into use. The scheme is due to launch this summer. For more information email LeicesterHAZ@leicester.gov.uk