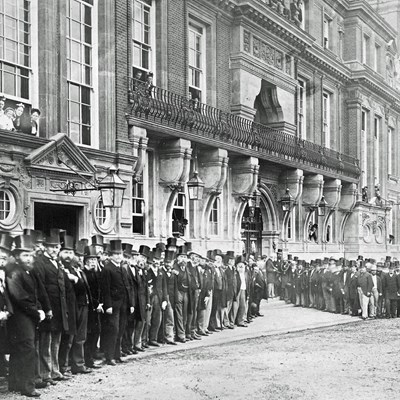 PEOPLE are being offered the chance to learn more about Leicester’s Grade ll* listed Town Hall and the part it's played in the life of the city, through free guided tours starting next week.

Led by a Blue Badge Guide, the tours will take place at 2pm on the first Wednesday of every month, from 3 August, and will last about an hour and a half. There is no need to book, and up to 40 people can take part in each tour.

Deputy city mayor Cllr Piara Singh Clair said: “The Town Hall is one of the city’s most iconic buildings and is linked to many fascinating stories about the development of Leicester.

“I’m really pleased these tours will be bringing those stories to life, and giving people the chance to learn more about the building but also about the history of our city.”

Prior to its construction, Leicester was using the medieval Guildhall as its Town Hall, but by the 1870s this could not accommodate the needs of a rapidly growing industrial town.

The old cattle market site was chosen as the location for a new building, and Leicester-born architect Frances J. Hames won a competition to design it with his Queen Anne-style proposal.

Construction started in 1875, and the new Town Hall housed the council offices, law courts, sanitary department, school board and 30 lamplighters. The borough police moved into the basement, and the fire brigade had a station behind the building.

Frances J. Hames also designed Town Hall Square with its fountain, which was a gift from Alderman Israel Hart, the first Jewish Mayor of Leicester.

Starting from the main reception at the front of the Town hall, the tours will take in the court rooms, council chamber, tea-room and former jail cells. Visitors will also be able to learn more about the city’s collection of civic silver which is on display in the tea-room.