Howzat for a reward? Cycle to the cricket and get £5 free credit 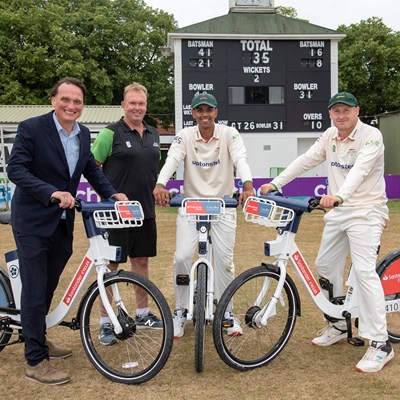 ANYONE who gets to the cricket on a Santander Cycles Leicester e-bike this summer will get a free £5 credit for future e-bike journeys.

During August and September, anyone who wants to use the city’s e-bike share scheme to travel to Leicestershire County Cricket Club’s Uptonsteel County Ground can use a unique code to claim a free £5 for their virtual wallet, to be used on any future Santander Cycles Leicester e-bike journey they like.

To claim the free credit, simply log into your account – or create one at www.rideonleicester.com – and quote LCCC22 from 1stAugust – 30th September. The offer is limited to the first 200 users and on a first come first served basis so be quick!

And players from Leicestershire County Cricket Club are keenly backing the scheme. Captain Callum Parkinson and Rishi Patel took time out of their recent four-day County Championship game against Glamorgan to try out the bikes at their Grace Road ground, which is a five-minute walk from a Santander Cycles Leicester docking station on Saffron Lane.

Jack Bradley Head of Marketing & Consumer Sales at Leicestershire County Cricket Club said: “These bikes are a great way to get around and they’re really easy to use, whether you’re a regular cyclist or someone who is new to it. It means you don’t have to worry about parking or fuel costs, you can just unlock a bike and start riding.

“Our ground is only about 15 minutes from the city centre by e-bike, so it could well be the quickest way of getting here, too – leaving you plenty of time to sit back, relax and enjoy the cricket!”

Santander Cycles Leicester offers anyone visiting, living or working in the city the opportunity to get around by e-bike. Docking stations, where you can pick up and return the bikes, are available throughout the city centre and in key locations including Saffron Lane, Queens Road, the National Space Centre, Leicester railway station and St Margaret’s bus station. You can book a docking space, which is recommended, to make sure there’s a space to park your bike at the end of your journey.

Forty-four docking stations are currently online with a total of at least 54 planned once the current round of expansion is completed. This will make Santander Cycles Leicester and its fleet of 500 bikes the largest docked e-bike scheme in the UK.

Since the lifting of lockdown restrictions in April last year, the e-bike share scheme has been used by more than 25,000 people, with 70,000 trips made on the electric bikes.

Deputy city mayor for environment and transport, Cllr Adam Clarke, said: “This is a great way to get to the cricket ground. It’s in my ward and I know it can get really congested around there on matchdays. Now you can beat the traffic and help to ease congestion by hopping on an e-bike instead.

“Leicester is an ideal city to explore by e-bike, with journeys possible from the outskirts of the city to the centre in around half an hour. There aren’t many major hills, but an e-bike can make light work of them anyway!

“This is affordable, green, congestion-busting transport for anyone moving around Leicester, and I hope lots of people will join Captain Callum Parkinson, Rishi Patel and thousands of others who have already given it a try.”

Santander Cycles Leicester is operated by e-mobility specialists Ride On, on behalf of Leicester City Council. To use the scheme, you register online, buy a plan based on your needs and then use your smartphone to unlock an e-bike and start riding. Pay as you go, monthly and annual memberships are all available, with journeys starting from as little as 60p plus your membership.

To find out more and to sign up to Santander Cycles Leicester, visit www.rideonleicester.com