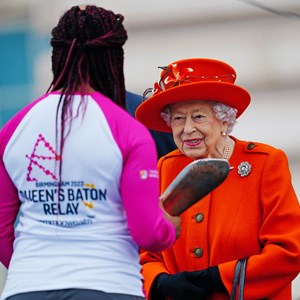 THE BIRMINGHAM 2022 Queen’s Baton Relay will arrive in Leicester this week as part of the build-up to 11 days of spectacular sporting action at this summer’s Commonwealth Games.

Representing a journey that brings together communities across the Commonwealth, the 16th official Queen’s Baton Relay will be welcomed to Leicester on Sunday (10 July), with a busy schedule of sporting activities for people to enjoy.

From 11am to 3pm, people will be able to enjoy free activities provided by the city council and the city’s professional sports clubs in Green Dragon Square and Jubilee Square – with some entertaining street performers lining the Baton’s route through the city centre too.

At 12:02pm, the Baton – which has been beautifully crafted from copper, aluminium and steel – will arrive in Green Dragon Square, where there’ll be wheelchair rugby with the Leicester Tigers Foundation and basketball fun with the Leicester Riders.

The Baton will then continue its journey through the city centre via Gallowtree Gate, the Clock Tower, High Street, Carts Lane, Loseby Lane, St Martins, the King Richard III Visitor Centre, Peacock Lane, Applegate and – finally – Jubilee Square, where it’s due to arrive at 12:14pm.

There will be a brief opportunity for people to take photos with the Baton, before it continues its onward journey to Nottingham at 12.24pm.

Deputy city mayor Cllr Piara Singh Clair said: "Leicester is a city with a proud sporting history, so we are delighted to play our part in the build-up to the Birmingham 2022 Commonwealth Games.

"There's nothing like sporting success to bring people together, and the achievements of our professional sports men and women over the years have given us plenty to celebrate.

"This shared love of sport will unite us again on Sunday, when we look forward to welcoming the Queen's Baton Relay to our city centre."

Phil Batty, Director of Ceremonies, Culture & Queen's Baton Relay, said: “We hope that communities across Leicester will join the excitement and line the streets to cheer on our incredible Batonbearers and celebrate the Birmingham 2022 Commonwealth Games.”

The Birmingham 2022 Queen’s Baton Relay began at Buckingham Palace on 7 October 2021, when The Queen placed Her Message to the Commonwealth into the Baton and passed it to four-time Paralympic gold medallist Kadeena Cox (pictured), who had the honour of being the first of thousands of Batonbearers to carry the Baton.

Since then, the Baton has visited Commonwealth nations and territories in Europe, Africa, Oceania, the Caribbean and the Americas. It will also be touring the Home Nations, and starts its tour of England today (Monday 4 July).

The Baton will finally arrive in the West Midlands for the Opening Ceremony of Birmingham 2022 on Thursday 28 July 2022.

For more information on the Queen’s Baton Relay, visit www.birmingham2022.com/qbr

The Birmingham 2022 Commonwealth Games will take place from 28 July until 8 August 2022.

The programme of free entertainment supporting the arrival of The Queen’s Baton Relay in Leicester on Sunday 10 July is as follows:

The Queen’s Baton Relay’s route through Leicester will be as follows:

Picture caption: Her Majesty The Queen launches the relay in October 2021 by handing the Baton to four-time Paralympic gold medallist Kadeena Cox.