Outdoor attractions to close temporarily as extreme heat is forecast 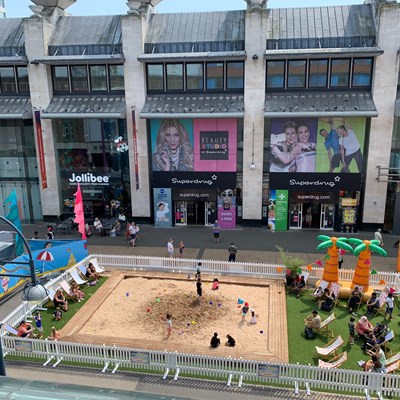 THE SANDY beach and funfair rides on Leicester’s Humberstone Gate will be closed early next week as the Met Office issues its first ever Red warning for exceptional heat in the UK.

With temperatures likely to be in the high 30sC on Monday and Tuesday (18-19 July), the city council and partner Billy Bates & Sons’ Funfair have decided to close the attractions in the interests of public safety.

Deputy city mayor Cllr Piara Singh Clair said: “In these extreme temperatures, the sand on our beach would be far too hot for children to play in.

“In the interests of our customers’ wellbeing, and the safety of our staff, we have decided to close these attractions on Monday and Tuesday.

“While this extreme weather continues, we would advise people to seek out the shade – and, weather permitting, we hope to reopen the City Beach and the funfair on Wednesday (20 July).”

The funfair on Abbey Park will also be closed on Monday and Tuesday (18-19 July), and a Railway Day due to take place at Abbey Pumping Station on Tuesday (19 July) has been postponed too.

There will be another chance to enjoy a ride on the narrow gauge railway at the Railway Day next Tuesday (26 July) – and every Tuesday until 23 August. Rides on the railway cost 50p (cash only), with trains running between 12 noon and 4pm.

Director of public health Professor Ivan Browne said: “These high temperatures can have adverse health effects, so it’s really important that people plan for the heat and consider changing their routines.

“Drink plenty of water, walk in the shade, avoid physical exertion in the hottest part of the day and try to avoid drinking alcohol, as this will make you more dehydrated.

“With a bit of common sense, we can stay safe in the heat.”

Further advice on staying safe in a heatwave is available from the NHS website.