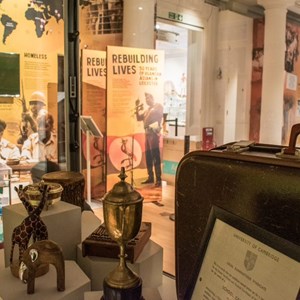 FINISHING touches are being made to a landmark new exhibition marking the 50th anniversary of the arrival of thousands of Ugandan Asians in Leicester.

The exhibition, entitled ‘Rebuilding Lives: 50 Years of Ugandan Asians in Leicester’ will both mark the anniversary of the exodus in 1972 by those fleeing the brutal Ugandan dictator Idi Amin, and also celebrate the contribution the Asian community has made to Leicester’s culture and community over the last half a century.

The exhibition includes hundreds of artefacts, personal items and photographs donated to the exhibition from throughout the UK, from people whose families made the traumatic journey from Uganda to start a new life.

It is being organised by Leicester-based arts organisation Navrang, which was also behind the hugely popular exhibition about Ugandan Asians in Leicester a decade ago, as well as the highly-commended ‘The History of Diwali in Leicester’ project in 2015.

The organisation, supported by Loughborough-based museums expert and curator Professor Graham Black, have brought together the exhibition items, along with dozens of recordings of personal accounts by people who fled Uganda, usually at very short notice and in many cases with only a single suitcase of belongings.

Interactive displays will allow visitors to hear the first-hand stories linked to everyday objects which came to symbolise part of their perilous voyage in search of a new life.

Navrang is being supported by Leicester City Council, with the exhibition being the first to be held at Leicester Museum and Art Gallery’s new display space, created in the former World Arts Gallery on the museum’s first floor.

The group was awarded just over £100,000 from the National Lottery Heritage Fund for a series of regional events, including this exhibition. In addition Leicester City Council’s Museums and Galleries Services has contributed £10,000 towards the event.

It will run at Leicester Museum and Art Gallery in New Walk from Friday, July 8 until December 2022, and will be accompanied by a smaller touring exhibition which will enable the story to be told at local community centres and other venues.

Leicester City Mayor Peter Soulsby said: “It has been 50 years since thousands of Ugandan Asians came to the UK seeking a new life after being expelled by Idi Amin, and this exhibition really helps bring alive their stories to a new generation of people.

“The compelling first-hand stories of the upheaval of travelling halfway across the world with just a suitcase of belongings, along with personal items that people brought with them, really bring home the disruption and suffering of people forced to start life all over again.

“Sadly, many of these themes are just as relevant now as they were half a century ago.”

More than 27,000 expelled Ugandan Asians came to Britain and several thousand of those started new lives in Leicester.

Cllr Piara Singh Clair, Leicester deputy city mayor responsible for culture, leisure and sport, added: “As well as commemorating the resilience and resourcefulness of thousands of people who were displaced and forced to start all over again, the exhibition will also celebrate the huge contribution that Leicester’s Ugandan Asian population has made to the city’s identity and culture over the last 50 years.”

Navrang’s Nisha Popat said: “We’re so grateful to the Ugandan community here in Leicester and across the UK for sharing their stories and items with us.

“The response we’ve had has been overwhelming. Over the last six months, as well as collecting stories and items, we’ve also managed to reunite long lost friends and family - it’s been amazing.

“We want to say a big thank you to the National Lottery Heritage Fund, Leicester City Council and the Leicester Museum and Art Gallery for their continued support.

“The exhibition is set to be one of the biggest events of its kind marking the 50th anniversary of Ugandan Asians coming to the UK and we can’t wait to welcome everyone to Leicester Museum and Art Gallery to see it for themselves.”