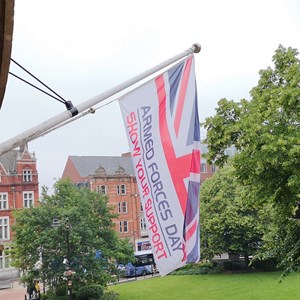 THE FLAG of the Armed Forces will be raised in Leicester’s Town Hall Square on Monday (20 June) to mark the start of Armed Forces Week.

Lord Mayor Cllr George Cole will be joined by Deputy Lieutenant Ramanbhai Barber for the simple ceremony at 11am.

The flag-raising ceremony will be followed by the Armed Forces Day parade on Saturday (25 June).

Led by the pipes and drums of the Seaforth Highlanders, the 400-strong parade of service personnel, veterans, reservists and cadets will step off from Jubilee Square at 10.30am and make its way to Green Dragon Square.

Ongoing works at Leicester Cathedral mean that the Drumhead Service ­– a traditional service held in the field, in which regimental drums are placed together to form an altar – will take place in Green Dragon Square this year.

The parade route will take in High Street, Gallowtree Gate and Horsefair Street, before arriving in Green Dragon Square.

Crowds in Green Dragon Square will be entertained by the Corps of Drums from 10.45am, before a fly-past by a single Spitfire at 11.16am will signal the start of the open-air service.

Led by the Bishop of Loughborough, Saju Muthalaly, the 30-minute service will include the reflections of a serving soldier and performances by the Cottesmore Military Wives Choir.

Restrictions in place because of the coronavirus pandemic mean that it’s the first time since 2019 that the parade has taken place – and Lord Mayor Cllr George Cole is hoping that people will turn out in numbers on Saturday 25 June to show their support.

“Let’s show our service men and women how much we appreciate them by lining the parade route on 25 June,” he said.

“Armed Forces Day is an important opportunity to show our support – and it’s also an opportunity to enjoy the spectacle of a marching band and a military parade, right here, in our city centre.

“After missing the last two years due to Covid, we are delighted to acknowledge the work of our armed forces, both past and present, and to welcome them back to Leicester.”

“Both my parents served in the forces, so I know the sacrifices that our servicemen and women make to serve our country,” she said.

“In a city as diverse as Leicester, we don’t need reminding of the huge role played by our Commonwealth partners in various conflicts over the years.

“Armed Forces Week gives us an opportunity to show our gratitude to all of those brave men and women, from Britain and beyond, who continue to play such a vital role in the security of our country.”

Leicester has a longstanding relationship with local units of the armed forces, with both the Royal Lancers and Royal Anglian Regiments having been granted the freedom of the city of Leicester.

The city council is also a signatory of the Armed Forces Covenant, which sets out the authority’s relationship with the armed forces, and the services available to current and former personnel and their families.