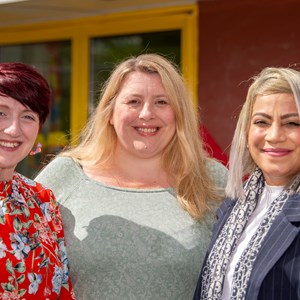 TWO parent champions from Leicester have won national awards for the work they do to help others.

Ciara Audley and Farah Hussain were recognised by The Coram Family & Childcare Trust - a family charity based in London - at the charity’s recent Parent Champion Awards ceremony and conference.

Ciara, from Braunstone, won an award in the category of volunteer who has made the most personal progress, while Farah, who lives near Fosse Park, won the best newcomer award.

Parent champions are volunteers who help local families to access services and support from a council’s network of children’s centres. They provide a link between the community and local services, and represent the views of parents to help shape future services.

In Leicester, for example, parent champions have been heavily involved in organising Get Up And Go, the council’s annual summer programme to encourage children, young people and their parents to be physically active during the summer period with a range of low-cost or no-cost activities. They have also taken part in interviews for members of council staff, as part of a recruitment panel.

Deputy city mayor Cllr Sarah Russell, who leads on social care and anti-poverty, said: “I’m so proud of our parent champion programme and of all our parent champions. Ciara and Farah have worked so hard and fully deserve these fantastic awards.

“These awards build on the success of our parent champions programme, which is now well established and last year won Parent Champion Scheme of the Year at the same awards.

“It’s so important that local parents – as well as children and young people – are at the heart of what we do. Involving them in the services we provide is a crucial way in which we can ensure that what we offer is what parents want and need.”

Ciara, who won the Parent Champion award for the most personal progress, said: “I’ve used Braunstone children’s centre for more than 20 years, from when my own children were very young. After I had my twins – now 14 – I suffered from post-natal depression and anxiety. This developed into severe agoraphobia and I didn’t work for seven years.

“I used the Early Help service at the children’s centre and it was a staff member there who suggested I become a parent champion. I remember one of the first training sessions we had was in town, and I had to get myself there – I was shaking. But I met a friend there, another parent champion, and I haven’t looked back since then.

“A lot of parents here have anxiety, they don’t have much money, and after they school run, they’re left at home with a toddler all day – it can be lonely. I help to get the word out that there are stay and play groups to help you; there are groups for young mums, all sorts of things. I walk them up to groups from their front door because I know how daunting it can be that first time. Then they come back, they make friends, their children progress – it’s great to see. I’m giving back to the community and I feel like part of a big family.”

Farah, who won the best newcomer award, said: “I was referred to the children’s centre through a family support worker. I did a parenting programme and then they asked me to be a volunteer. I wasn’t sure at first, but they encouraged me. I started last November and it’s been great.

“I’ve joined courses, attended online meetings and supported lots of different projects at children’s centres across the city.  They need that parent view – I’m on the recruitment panel for team managers to be a parent voice. It’s exciting because I’ve done management roles in the past, so it’s ideal that I can use my skills for this.

“I’m going to be running focus groups on sanitary protection projects we’re working on with public health, to tackle period poverty and make sure women and girls have what they need.  I really enjoy working with people and helping people through projects like this. Kindness doesn’t cost anything and I’m inspired by other people who come forward to volunteer and give up their time despite what else they have going on.

“I’m truly honoured by the new volunteer award. It’s so nice to be recognised and acknowledged as I have put my heart and soul into it. It’s an amazing feeling!”

To find out more about the services available from Leicester’s Children, Young People and Family centres, visit https://families.leicester.gov.uk/childrenscentres/